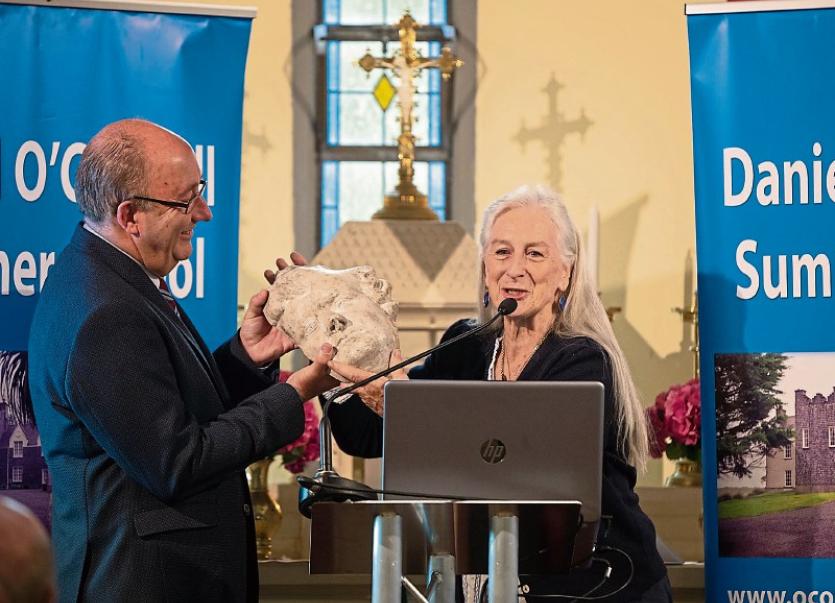 THE death mask of Daniel O’Connell, the Liberator, will be repaired by the Office of Public Works (OPW) before it goes on permanent display at O’Connell’s home, Derrynane House in Co Kerry, a spokeman for the OPW has confirmed.

The death mask was presented to Maurice Buckley, chairman of the OPW by Lady Geraldine Dunraven at the weekend.

“I think it is gone to its right home,” Lady Geraldine explained to the Limerick Leader. “We have been its custodians for 161 years. It was a wonderful and great honour to have it in the family.

“It was such a special thing to be able to return the death mask,” she continued.  The timing of the presentation was very apt, taking place during National Heritage Week, and while the annual Daniel O'Connell Summer School was in full swing in Derrynane.

Lady Geraldine explained that she and her daughter Ana had been thinking about it for about two years.  But she and her late husband, Thady, the last Earl of Dunraven had spoken about bequeathing the mask on several occasions before his death.

“It is quite heavy,” she explained. “His nose got broken and that was the catalyst.”

How it came into the possession of the Dunraven family is still a bit of mystery. But, Lady Geraldine said, the third Earl of Dunraven was a great friend of Daniel O’Connell. “We  believe somebody may have given it to the Third Earl of Dunraven in memorial of the two men's long years of friendship."

Lady Geraldine’s daughter Ana, vividly remembers the death mask from childhood and the stories told her by her late father, Thady, the last Earl of Dunraven who died in 2011.

“My father always told me there were 12 death masks,” Lady Ana said. “I don’t know if that is true but that was what Dad said.”  “For all those years, it sat quite reverently on a shelf,” she explained.

“In recent years, we have had quite a lot of young children, with mischievious hands, in the house and unfortunately a little bit of damage was done. We didn’t want the mask to be any more damaged and returning it to the State would be a good idea.”

The friendship between the Third Earl and Daniel O’Connell has extended down through the generations. The last Earl, Thady, was very friendly with the late Dr Dan O’Connell, a descendant of the Liberator, and also with historian Maurice O’Connell. Dr Dan’s son and his family are now close neighbours to the Dunravens’ home in Derrynane.

The death mask was presented to the State in a specially-made white box, wrapped with an emerald green ribbon.

Daniel O'Connell died in 1847 in Genoa, Italy, while on pilgrimage to Rome at the age of 71.

At the time of his death, it was not uncommon that a death mask would be made of an important person's face with the masks often used by sculptors and artists when creating busts and paintings.

The death mask will be an “incredibly valuable” addition to the collection at Derrynane House, Mr Buckley said. That collection tells the story of Daniel O’Connell from the cradle to the grave. “We look forward to making it central to the collection,” he said.