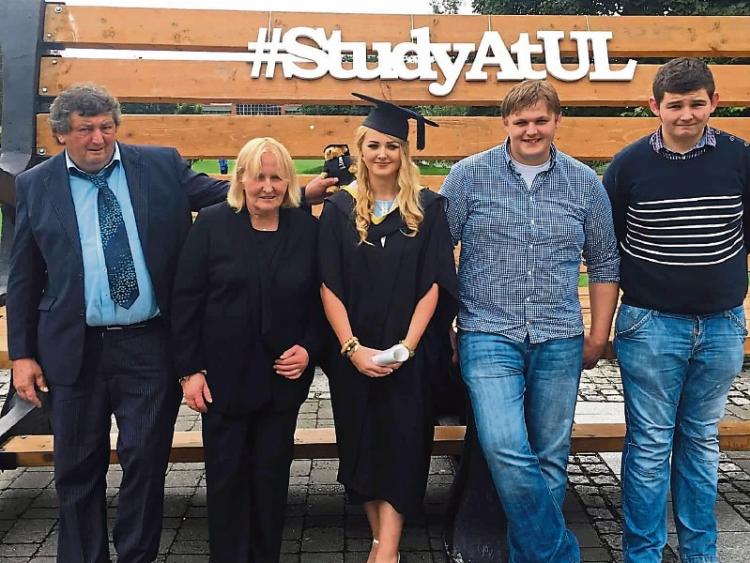 The late Colman Collopy with his family

THE CHILDREN of a County Limerick farmer, who tragically passed away after falling from a roof, have paid an emotional tribute to their beloved father.

The sons and daughter of Colman Collopy said: “Colman or Da as we used to call him was a big strong man with a big strong heart.”

The 61-year-old was originally from Effin but moved to Ardpatrick after he purchased a farm there. Colman was a beef farmer, expert welder, builder of cattle sheds and silage contractor. He was laid to rest in Ballingaddy cemetery on Thursday, August 22 following one of the biggest funerals in County Limerick this year.

The accident happened on Saturday, August 17, while he was building a shed. He died on the following day. Colman’s wife Geraldine, sons Patrick and Colman and daughter Áine have been left heartbroken at his death.

His children said Colman was more more like a brother to them than a father.

“He was always there to help us. He would always drop everything to help us, even if he didn’t know how to help he would still try to help. He was a very family orientated man, we would always do everything as a family. His loss has created such a large void in the family that can never be replaced.

“We were very lucky to grow up with him as our father and learn everything we know from him and we will cherish all the great memories we had with him and the 28 great years of marriage with mam,” they said.

The Collopy family wished to thank all their extended familiy, neighbours and friends for their generosity and support during this difficult time.

Tributes have poured in. Fr Tony Bluett, who said the funeral Mass, described it as a “desperate shock” when the news broke.

“They are a lovely family.  I knew Colman fairly well. He was a very hard worker and he was brilliant with his hands,” said Fr Bluett.

Continuing that theme, Ger Quain, the Colmanswell man who chairs ICMSA’s national dairy committee, said Colman had a “a noble pair of hands”.

“He could turn his hand to anything. He was gifted with his hands. He had a noble pair of hands. He was a Trojan worker, he was never afraid to go at a job,” said Ger, who described Colman as a “fierce nice man”.

“He is a tragic loss to his family and my sympathies go to his wife and children. He was still a young man. He was very active. He was a big, powerful, strong man,” said Ger.

“Once he would repair something there would be no going back to him with it. He would do a mighty job on a machine,” said Ger.

Limerick IFA chairman, Shay Galvin expressed his condolences on behalf of the organisation to the Collopy family.

Limerick Macra chairperson, Vanessa Crean said the sudden passing of Colman has “touched each and everyone one of us”. She extended any form of help and support they could give.

‘’We are heartbroken for Pa, Colman and Áine, who are members of our Kilmallock club. The Collopy family have always been so generous and helpful towards both Kilmallock and Limerick Macra and we are deeply saddened at the shock, turmoil and great loss they have experienced,’ said Vanessa.

She continued, ‘’The Collopy family are so highly regarded and respected in both farming circles and the greater Kilmallock community and that was clearly evident from the stories of Colman that were being shared among the vast number of people who queued to sympathise with the family on Wednesday evening and to pay their final respects to Colman. Ar dheis Dé go raibh a anam.’’

One of the attendees, Deputy Niall Collins said the large number of mourners was a testament to the respect Colman and his family is held.

“Our sympathies and condolences are with the Collopy family on their very sad and tragic loss,” said Deputy Collins.