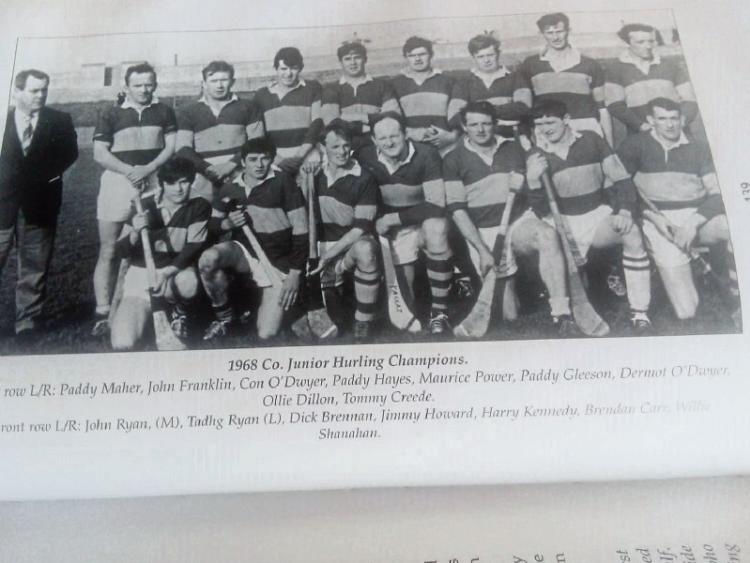 The late Jimmy Howard, front row centre, was a master on the field and a gentle giant off it

BRIGADIER General and former team mate Paddy Hayes gave a moving graveside oration for Jimmy Howard. The 79-year-old from Pallasgreen  who went to his God on July 27.

I was sitting at home in Cork having watched the Tipp v Wexford match and reflecting on Limerick’s sad loss on Saturday, which I had attended, when I received a call of an even greater loss.

The great Jimmy Howard had passed away.  I was the junior member of the great Pallas hurling team that won County Junior honours in 1968 and was defeated in the Senior Final of 1969.  Jimmy is gone to join four other members of that great team and in his honour I will name the team of 68/69.

My memories of Jimmy may be different than others depending on the era from which you got your experiences of him but I suspect they will not differ in one very important fact and that is of a colossus of a centre half back with gifted hands and a combative steeliness, a loyal Pallas man and a great friend with a constant smile and an ever ready quip. Even though Jimmy spent a large portion of his life in Kennedy Park, where he and Margaret raised a fine family and went on to become vital members of Old Christians GAA Club, he never forgot his roots in Pallasgreen.

I had the privilege of playing right half back beside him in many a tussle once I made my debut and how lucky I was. I have played hurling since in many counties and I’m an avid follower of the club scene in Cork and I can safely say that I have seen centre backs who may have been his equal but I never saw a better club centre half back than Jimmy Howard.

He made life very easy for those beside him with his magnificent fetching and he was never selfish with the ball and would invariably deliver an intelligent hand pass which made others around him look good. I think hurling was a bit rougher in those days before tactics took over and if anybody tried to take advantage of the young fellas Jimmy would politely ask them to desist or he might have to employ other less subtle methods. They usually complied!

He was the backbone of many a great success as far back as County Junior Champions in 1958, not to mention all the tournament successes in places like Doon, Cappamore, Herbertstown etc

I browsed through Ger O’Connell’s magnificent history of Pallas GAA and read with interest some of Jimmy’s thoughts in an interview he gave for the publication. His greatest regret was not winning the County Senior final in 1969. I think we would have been a lot closer to Patrickswell if he had not been carrying a leg injury into the final.

He also cited the East Senior League Final against  South Liberties in 1968, one week after the county junior final success and which Pallas won by two points as being the most exciting club game he ever played in. Indeed, the best games we had in those years were against Liberties. I keep telling my Cork hurling friends that there was never a puck of a ball between us and a team filled with nationally known names such as Hartigan, Grimes and McKenna.

He had a great fondness for our sixteenth man and renowned trainer, the late Paddy Maher and together they were a formidable pair.

The status of  Jimmy as a hurler was, I think, very well summed up in this extract from the  press report after the County Junior Final in 1968.

“In the early stages we were treated to some superb ball play and a great exhibition from two outstanding centre half backs, Jimmy Howard and Tom Markham. The latter was harried in unrelentless fashion by John Franklin and eventually faded from the picture, but Howard, a giant of a man, moved more and more to the fore as the game progressed”

We eventually beat St Mary’s by 10 points, the closest any team ran us in that campaign. A giant of a man in every way is how the late, great Jimmy Howard will be remembered by all in Pallasgreen.

For Margaret, Pat, Paul David, James, Deirdre and the late Susan, with whom he is now reunited, and the extended family, your grief should be lessened in the knowledge of the high esteem in which he is held by the people of the parish of Pallasgreen.

Read also: Shock and sadness as Limerick farmer laid to rest after fall from a roof