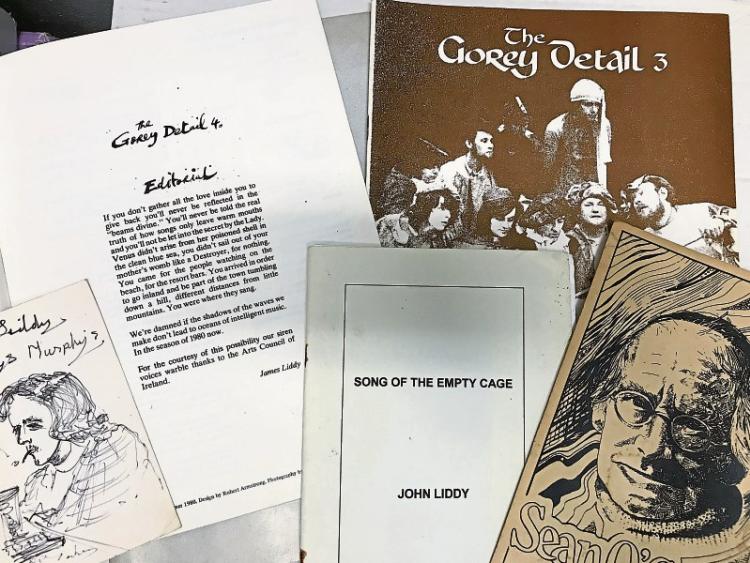 UNIVERSITY of Limerick (UL) is the new home to treasure trove of papers that “perfectly describe the life, struggles and successes of a poet.”

The extensive archive, which is now in the process of being catalogued by Special Collections at UL, is 17 boxes strong and features papers that reflect John Liddy’s work as a poet, editor, publisher, reviewer and educator over 40 years.

The Liddy archive is rich in material relating to his poetry and correspondence with other poets and writers from all over the world, and shows his development in the Irish and European poetry tradition much like that of his fellow Limerick poet, Desmond O’Grady.

“I am very, very happy to have the collection of papers in UL and they have been very supportive of the idea,” explained John, who lives in Madrid where he works as a teacher and librarian.

“The collection has two hoards, as I call it, the Madrid hoard and the Limerick hoard. Within those are lots of avenues that I have taken throughout my life; trips to America, Yugoslavia, France – a lot of papers and details are in there.”

John Liddy was born in Youghal, Co. Cork but his family later moved to Limerick where he attended the Christian Brothers School in Sexton Street and worked with the Hunt Museum when it was located at the then National Institute for Higher Education in Plassey – which later became University of Limerick.

John became interested in poetry at an early age and gave recitations with the Castle Poets at King John’s Castle.

His first publication was Boundaries in 1974 and he is the founding editor along with Jim Burke of The Stony Thursday Book.

Ken Bergin, Head of Special Collections and Archives at UL, said: “John Liddy’s archive is very extensive and rich in Limerick and Irish literary history. We look forward to cataloguing it and making it available to researchers.

“It perfectly describes the life, struggles and successes of a poet and captures his creative process and the archive reflects all of that.”

The archive will take its place alongside the literary papers of Kate O’Brien, Michael Curtin, J. M. O’Neill, Gerard Gallivan and Seán Lysaght which are already held by the University of Limerick,” Mr Bergin added.

The documentation surrounding the initial publication of this journal provides a fascinating insight into the difficulties involved in producing a literary journal outside Dublin in the 1970s.

John embarked on a lecture tour of the United States in the late 1970s and his papers are full of letters and notes from poets and academics from the period. He moved to Madrid in 1985.

In total, John has published 11 books of poetry, including most recently Madrid and Other Poems in 2018, published by Limerick’s Revival Press.