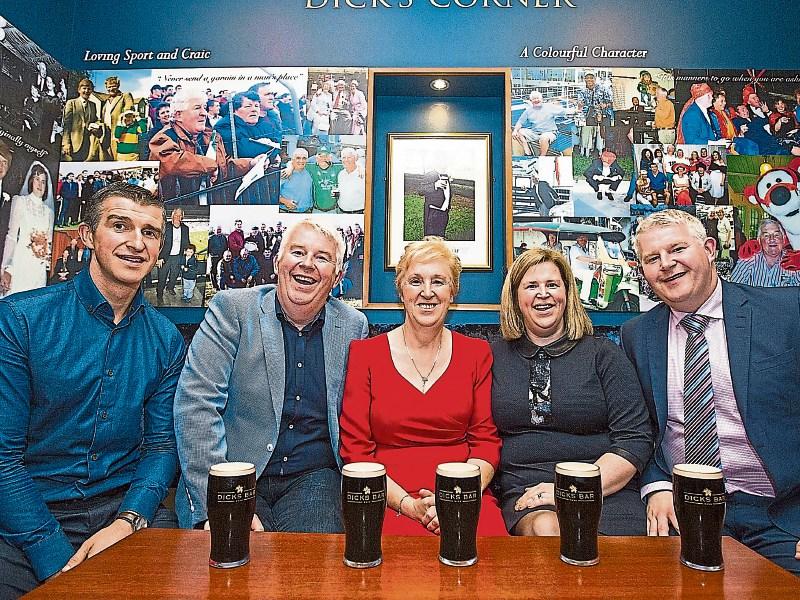 The Fitzgerald family pictured in 2016 at the launch of Dick's Bar in the Woodlands, in memory of the late Dick Fitzgerald. From left Conor, David, Mary, Elaina and Richard

LEADING Adare hotelier David Fitzgerald has slammed insurance companies for settling personal injury claims without contest or  without even informing the hotel involved.

He has recently faced two pay-outs totalling €80,000 arising from incidents where, he said, the hotel , the Fitzgeralds Woodlands House Hotel, was not at fault.

Coincidentally, Mr Fitzgerald’s remarks have come just hours after it was reported that Fine Gael TD Maria Bailey had resigned from the Select Committee on Members’ Interests following the fall-out from  her claim against a Dublin hotel over a fall from a swing. She withdrew the claim but attracted much criticism and was removed as chair of another Oireachtas committee by Taoiseach Leo Varadkar.

The incident also unleashed a flood of complaints from small businesses threatened with hardship or closure as a result of high insurance costs.

He has also switched insurance companies because of the two uncontested pay-outs, he told the Limerick Leader.  “On both occasions the claims had nothing to do with the hotel, but my insurance company paid for them,”  he said. In both incidents, he explained, the hotel was hosting events organised by other companies.

“A lady who attended, fell off the Bucking Bronco and sustained injury but that was completely unknown to me until I received a solicitor’s letter suing me and attaching the local company  to that but not the team-building company.”

Mr Fitzgerald’s insurers settled the claim for  €50,000 “without informing me”. And without contest. “I  would have said this is nothing to do with me, had they asked,” he said. “But that sits on my claim for five years and is part of the calculation for the premium.”

As part of his insurance policy, he continued, there is an excess clause but he refused to pay it.

In a second incident, the hotel was hosting an event organised by a third party who had their own insurance. A person attending the event fell and sued. “Once we received the solicitor’s letter, we referred it to the event organisers who said they would look after it,” Mr Fitzgerald said. But before that could be done, his own insurers had paid out €30,000.

“Sometimes people have accidents. That is fine. That is what we have insurance for. If I am at fault I have no issue,” Mr Fitzgerald said. “But when it is nothing to do with us, why am I being penalised?”

Ultimately, he continued, when this happens, everybody pays as the additional cost of insurance has to be spread.

“We are a community based hotel. We are known for investing in our community, in the hotel, in the infrastructure. If my insurance continues to double and treble, that takes from my ability to hire staff, to reinvest in the hotel, to invest in the community.”