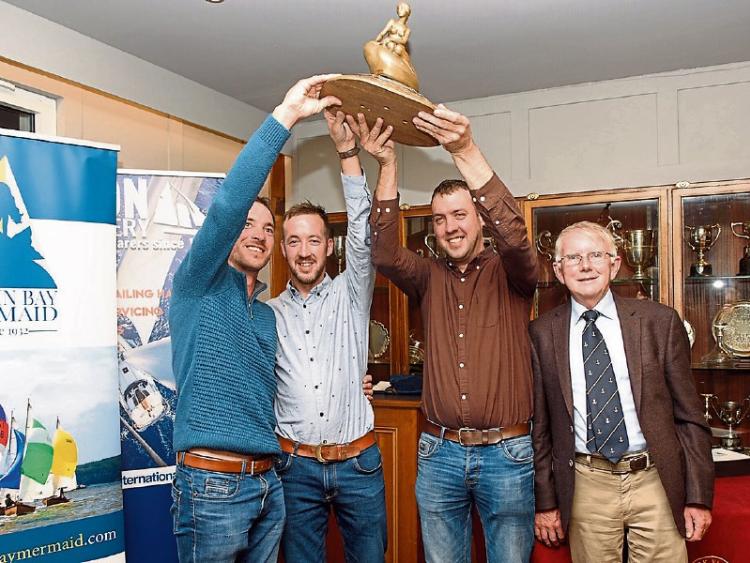 TRIPLET brothers Mark, Noel and Darragh McCormack have been making waves on the Irish yachting scene.

Last year, the triplets from Ardagh, who have been sailing with Foynes Yacht Club since they were children, won the National Mermaid Championship, clocking up a first for the club.

Then, last Sunday, the three sailors repeated the achievement to win the championship for the second year in a row. They were presented with the trophy at the Royal Cork Yacht Club by Paul Smith, president of the Mermaid Sailing Association.

To win the title, the brothers held off stiff competition from three other clubs, Skerries, Rush and Wexford in this ten-race series. In a nail biting finish on the final day,  the trio successfully defended their title on 188 Innocence coming from third overall with two races left to sail to emerge as champions.

Sailing is clearly in the blood in the McCormack family. The boys’ dad, James was commodore at Foynes Yacht Club for five years until 2018 and their mother Patricia, who is currently the club secretary, is also a sailor.

An older brother, Jamie, is also a sailor as well as being a great golfer and  younger brother Cian also golfs and sails. The boys’ sister Mary also sails with Foynes and helms the U25 J24 Jasper along with a crew of four.

Darragh and Mark work with Murphy International Ltd  based in Aughinish and Noel works with Irish Cement Ltd  in Limerick.

Last weekend’s achievement comes after another break-through win, when the three together with their cousin  Róisín and her boyfriend Michael Lynch, won the West of Ireland Championship on J24 Stouche which was hosted in Foynes.

Last weekend also, another keen sailing family from Foynes added still more silverware to the club’s  trophy cabinet. Oisin and Sean Finucane and Chris McDaid on 165 Sea Fox emerged as winners of the U25 Finucane Cup, also for the second year in a row. They also brought home the Designer Trophy for the biggest improvement in the fleet.