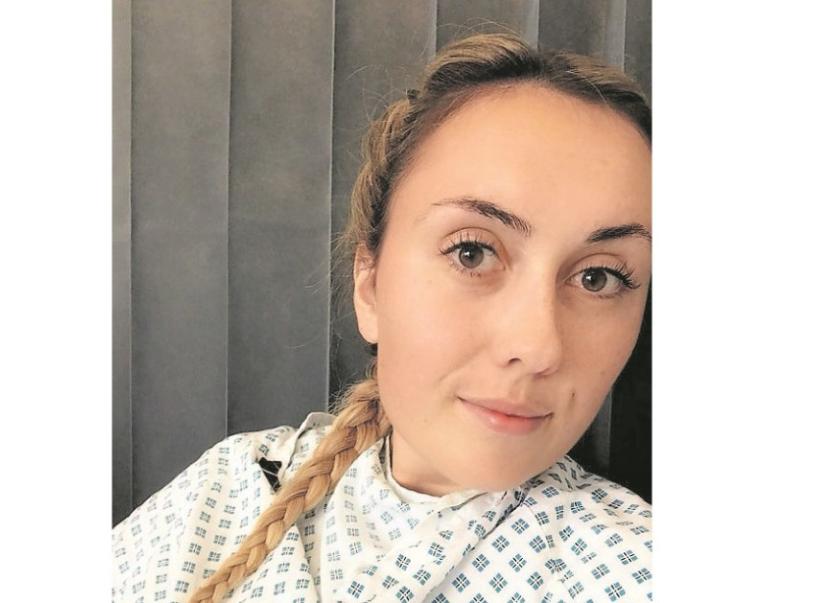 THROUGHOUT our lives, we’ll often have people tell us to ‘go with our gut feeling’ and to ‘trust our gut’.

It’s a weird but amazing thing, that our bodies speak to us in ways we don’t understand and for me, well, it saved my life.

I am a 25-year-old woman, living in London, just starting out in my career with the world at my feet. In February of this year, I watched cervical cancer campaigner Laura Brennan, and was  in awe as she used her final few months campaigning to help raise awareness of HPV and cervical cancer.

There was something about her story that made it personal for me. I had an inkling that something wasn’t right, or a fear that something was wrong. I had discussed my concerns with friends and family on more than one occasion but put it down to hypochondria.

It’s not like I had any symptoms or any real reason to believe that there was anything wrong, but I researched into the HPV vaccine and realised that I had just missed the window in school when it was introduced.

In April, I got a letter through the door from the NHS stating that I was due my cervical screening as my 25th birthday was approaching. I booked it almost instantly and had my appointment the following day.

My GP made a point of comforting me saying that ‘Everything looks normal, I don’t think you’ll have anything to worry about, 99% of the time I’ve been right’. I went home feeling at ease with that, not knowing that soon she’d lose a percentage of that statistic.

I got a call a few weeks later with the news that I had highly abnormal precancerous cells (high grade dyskaryosis CIN2 and CIN3) which followed with a colposcopy and LLETZ treatment to remove the cells.

I shared my story on social media to raise awareness and encourage young women to book their smear tests. I was emotionally drained and a bit shocked but glad it was all over and dealt with.

Two weeks later, I get a call. My whole body started shaking as I sat on my bed, nodding in agreement to a request to come straight into the hospital tomorrow to ‘discuss a plan’. My whole world fell apart. I sat in my London flat, totally alone and although London is only an hour's flight away, I have never felt so far away from home. I had to FaceTime my parents.

I was trembling, choking on the tears that dripped down onto my screen while trying to understand what had just happened.

The sense of panic over me was evident in the broken-hearted faces on the screen in front of me - I had no answers, no idea what was to come, I just knew that the medics found something and it wasn’t good.

Twenty-four  hours later I would walk out of the clinic with a little booklet on ‘How to deal with cervical cancer’.

“You’re very quiet” said the doctor as I stared blankly at her,  after gazing at the word cancer over and over, unable to process that this was indeed real life and not some horrific dream.

I still can’t bring myself to say the C word. It’s a word that rips through families like a flesh eating virus, a word that’s associated with loss and hurt and heartbreak. A word also associated with ‘battle’ and ‘fighter’ but I didn’t know if I’d have the emotional and physical strength in me to fight back.

I prepared myself for the worst - not being able to have kids, having to have a hysterectomy, radiotherapy, chemo, every possible outcome I could think of, so I could be ready for it.

I was diagnosed with Stage 1 cervical cancer and the doctor said I was very lucky I got my smear when I did. I spent the next three weeks reassuring people that I was going to be OK and that ‘I’m grand’ - too afraid to admit that I was scared, that I was absolutely terrified, in fact. I was totally numb and although I seemed present day to day at work, and with friends, doing everyday tasks, my mind was really elsewhere.

I had to fight for my family, for my partner, for my own sanity, for the future me and the family I hope to have one day. I had to be strong - pull my socks up and say ‘Come on, give me your best shot’.

I felt lucky that I acted quick and got the best possible outcome of a cancer diagnosis that I could have hoped for, as strange as that may sound. I have a chance of having a family that I never knew I yearned for until I was faced with the possibility of losing it. I feel blessed to have the NHS who have acted so swiftly and with such diligence and care.

But I also thank God every day that I’m not in Ireland right now. I thank God that I’m under top class care while I get the treatment I need because my country has failed the women of Ireland when it comes to cervical cancer.

The women of Ireland have lost faith in the HSE because of the cervical cancer scandal. Politicians have blood on their hands for the deaths of over 21 Irish women who lost their lives because they were failed by the system. If I were in Ireland right now, I could be waiting up to the new year for my smear test results alone. Can you imagine what diagnosis I’d be facing had I to wait until spring for biopsy results?

I shared my story with a message of hope to young women in Ireland, encouraging them to get checked and to take the steps necessary to potentially save lives. But what good is that when the system continues to fail them? When the system had repeatedly made error after error and mistake after mistake. How incompetent can one service be and how many women have to die for things to change?

The reports released this past week aim to take a ‘Women first’ approach to fixing the mess of this scandal. But what breaks my heart is no one is being held accountable for the lives we’ve lost.

“How much scandal can the screening programme take?” The NHS saved my life through early detection, intervention and prevention.

The women of Ireland deserve better.