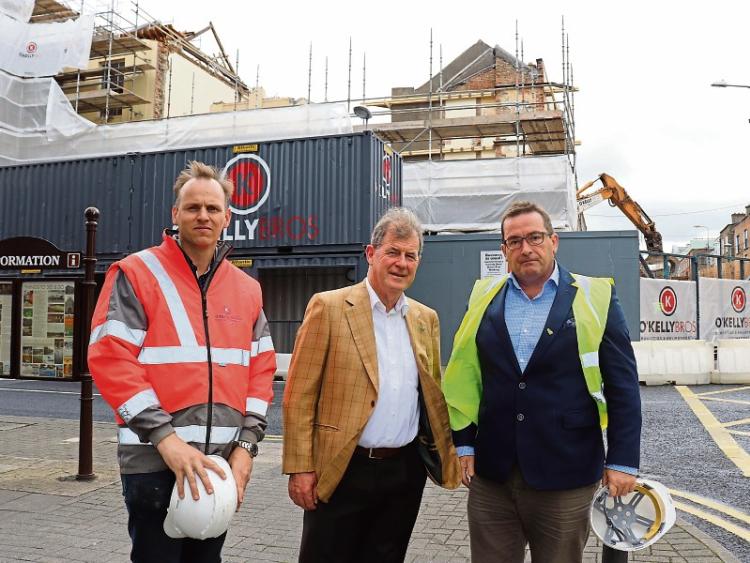 JP McManus, pictured with Paul Foley and Thomas O'Kelly of O'Kelly Brothers Construction checking in on the progress of the International Rugby Experience site on O'Connell Street

A NEW landmark site in the heart of Limerick is set to open in 2021. Works are continuing at speed on the €10m International Rugby Experience with the man largely responsible for the project JP McManus paying a visit to the Cecil Street-O’Connell Street site this week.

He witnessed the work of the builders, who are continuing to clear a site until very recently occupied by Fine’s Jewellers and adjoining businesses.

It is understood that work on demolishing the corner of the site will be complete in the next 10 days, at which time they can start building Limerick’s latest tourist attraction which is expected to draw 100,000 visitors a year.

The reason the site was chosen is to "help bring life and regeneration" to the city centre.

And there is confidence the early targets of 100,000 visitors a year can be easily met. Event Communications London, which was involved in the Titanic visitor centre in Belfast along with the National Army Museum in London and Van Gogh Experience in Amsterdam has won the contract to work on the project.

There will be  civic spaces and meeting rooms in the centre to allow local groups to run events.

As well as Mr McManus, another person behind the project is former Munster and Ireland captain, Paul O’Connell.​ He previously said: “It is envisaged that this Visitor Experience will be one of the best of its kind in the world and we can’t wait to really bring it to life on O’Connell Street in the heart of the city.” The 30,000-plus square foot development, located at 40-41 O’Connell Street, will drive the creation of 100 new jobs locally in construction. It’s anticipated dozens more will be generated once the building is complete​.