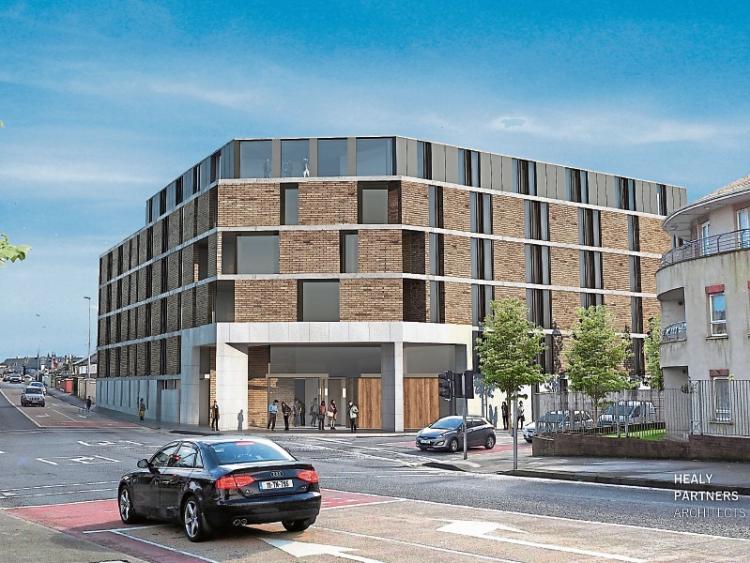 An architect's impression of how the building would look

TWO residents associations are to object to controversial plans to build a student complex on the city’s northside.

The Mayorstone Residents Assiciation and its counterparts in Kileely have both confirmed plans to formally write to the council on the proposals, which if granted, would see the former Hassett’s Pub knocked and replaced with a six-storey accommodation block.

Shelbourne Medical Properties plans will provide for 31 student apartment units, which would contain 143 beds in total.

On top of this, a medical centre is planned for the site with 20 car parking spaces and secure bicycle storage.

But there is division in the community, with the chairperson of the Mayorstone Residents Association Emma McKeown fearful it will exacerbate traffic issues in the area.

“We are objecting on a number of grounds,” she confirmed, “One is the height of the development. The next one is traffic, and the next is parking in the area. We feel he height is not in keeping with existing buildings at Hassett’s Cross. The scale of the building would not be aesthetically pleasing.”

Ms McKeown says cars already use Mayorstone as a “rat run” to avoid the Hassett’s Cross area, and she also made the point that the proposed medical centre entrance is right beside the existing school in the area.

Marie Quinlivan, who chairs the Kileely residents group said: “Residents in Sexton Street North have come to us about this. They are all older people, and living directly across from Hassett’s. They’re completely against it, as are the people in Shelbourne Road, many of whom are old and have disabilities.”

Ms Quinlivan, the mother of City TD Maurice, also expressed concerns about student homes could be vacant for three months of the year and “will be let out to every Tom, Dick and Harry”.

The developer was not available for comment as the Leader went to press.

But in a statement last month, they said it is “confident it is a worthwhile and much needed development” for the area, pointing out it will create jobs.