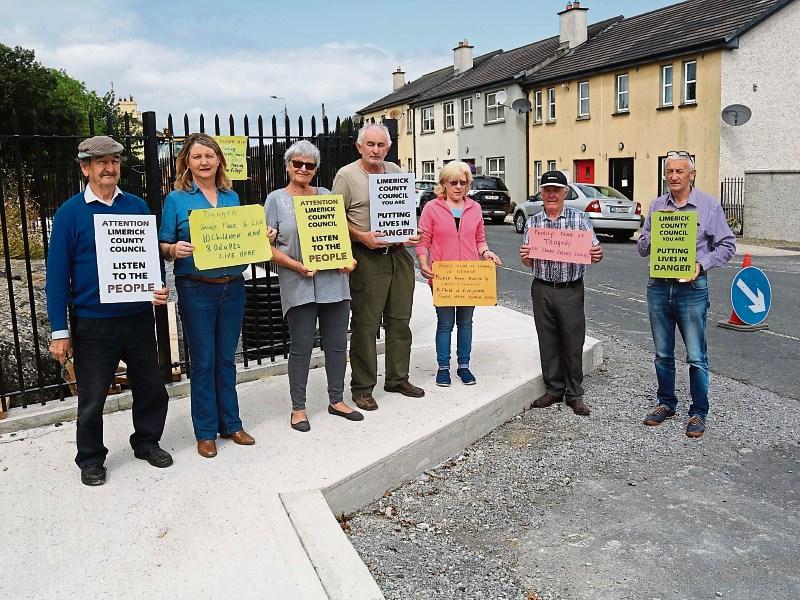 BRUREE residents have erected posters in their village to show their anger at recent roadworks.

One reads: “It will be too late to sort out this mess when someone gets killed. No one can give back a life. Madness by Limerick County Council.”

As you are heading in to Bruree from the Kilmallock side a high concrete kerb has been installed by the council that narrows the road. A footpath has been built behind it. It runs parallel to the old bridge.

Continuing towards the village a private landowner constructed a long railing outside the entrance to his property. This is located behind the kerb and the footpath. All the area behind the kerbing, footpaths and railings had been used for decades for parking and especially at Mass times. It was a common place for lorry drivers to rest as well.

Josephine McDonnell, who lives in one of the six houses across the road from the new railing, has got 481 signatures for a petition she started.

“We want the footpath, kerbing and the fence to be removed – the road is too narrow now. Somebody is going to be killed.

“There is a kerb jutting out at the bottle bank. Somebody is going to come down there in their car, hit that kerb and bounce across in to the houses,” said Ms McDonnell, who thanked locals and politicians for their support with their campaign.

As the road is a lot narrower the residents in the six houses are worried about their cars – parked outside their homes – being damaged.

Cllr Mike Donegan, cathaoirleach of the Cappamore-Kilmallock municipal district, called a rare special meeting on the issue at the beginning of July.

It was raised again at last Thursday’s monthly meeting.

Cllr Ger Mitchell asked for a “definition of a public area”.

“Are there planning issues in relation to a certain structure?” asked Cllr Mitchell.

Cllr Donegan confirmed the council was taking enforcement action in relation to the railing.

Cllr Eddie Ryan queried the fact that the landowner owns the land outside his property.

“I think there was an error drawing up the title deeds. It is a mistake that should have been rectified.

“There are hundreds of signatures. The community wants that space back. They could mark lines on the road – they don’t need that mass of concrete. All the concrete should be removed,” said Cllr Eddie Ryan.

Regarding clarification on land ownership, Diarmuid Sheehy, roads engineer, said they have been in touch with CIE in Dublin and are hoping to get a folio from them to clarify matters.

Mr Sheehy confirmed to the meeting that “enforcement has been issued in relation to a fence”.

“CIE still own it so I can’t see how it is any different in Bruree village. It is an established public space and should remain so,” said Cllr Eddie Ryan.

Regarding the current situation, Mr Sheehy said the footpaths were nearly constructed. The overlay is expected to start at the end of the month.

Mr Sheehy said his instructions are to finalise the works and “let the planning process deal with the fence”.

Cllr Martin Ryan said: “You have been instructed to carry on. Is that advisable considering a letter of enforcement has been issued.”

Mr Sheehy said: “That is a planning matter.”

Cllr Martin Ryan said: “If the folio is wrong we will have to push in our own footpath. We will be duplicating the work”.

Cllr Donegan said they need to look at the green area across from the bottle bank as a set down area and for parking.”

Councillors will now wait for clarification to come from CIE in Dublin on the folios. As well as councillors raising the issue, Deputy Niall Collins has also visited the village to see the works.

“The community is very upset about this. They brought me to see the situation first hand. I have followed it up with the council and I am assisting the community in seeking to have the matter rectified. I want the council to rectify all the issues to the satisfaction of the local community.

“They are awfully concerned about the loss of the public open space and the fact that the road has been narrowed so much. For decades people have been parking there and especially at Mass times. Do we expect elderly people to park miles from the church?

“The council have told me that there is a number of issues that they have to deal with - issues pertaining to land ownership and public lighting,” said Deputy Collins.