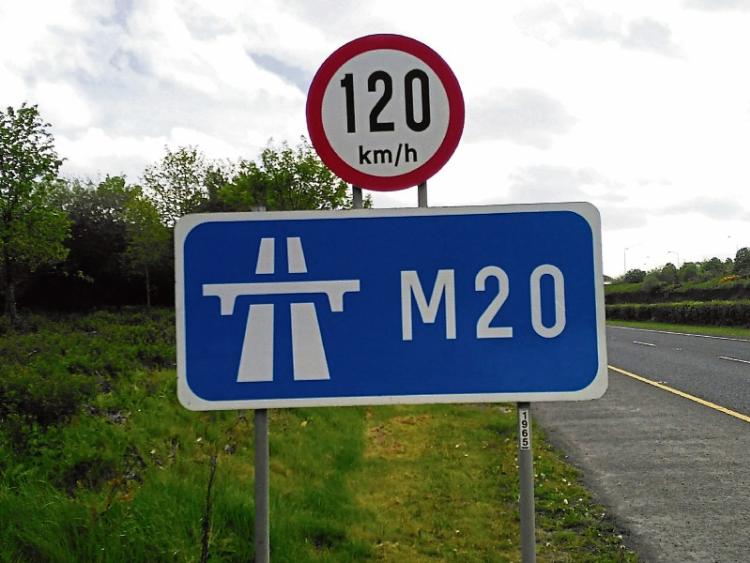 DEPUTY Niall Collins has criticised the continuing “lack of clarity” over the route for the proposed Limerick to Cork motorway.

“This is dragging on far too long. Farmers and house owners on the previous preferred route have this hanging over them for over a decade at this stage. Farms are going to be cut in two. They can’t plan for the future. Why can’t the plans be spelt out?” said Deputy Collins.

Due to the volume of calls from constituents he tried to find some answers by tabling a number of questions in the Dail.

He asked the Minister for Transport to provide an update on the M20 Limerick to Cork motorway project, including the consultation process, costs; timelines for completion and if he will make a statement on the matter.

The original proposed route would have extended for 80km from the junction with the N21 at Attyflynn in County Limerick to near Blarney in County Cork. It would cut the travel time from those points from 61 to 45 minutes.

The selected route submitted for planning went west of Croom, O’Rourke’s Cross and Charleville but east of Mallow and Buttevant. It would have required the compulsory purchase of 16 residences, 905 hectares affecting 235 farms and 247 other properties, with land acquisition accounting for €150 million of the €950 million cost, according to the Irish Times.

In reply to Deputy Collins, Minister Ross said he has responsibility for overall policy and funding in relation to the national roads programme.

“Under the Roads Acts 1993-2015, the planning, design, procurement and construction of individual national roads is a matter for Transport Infrastructure Ireland (TII), in conjunction with the local authorities concerned. Noting the above position, I have referred your question to TII for a direct reply,” said Minister Ross.

Deputy Collins subsequently received a letter from TII which he described as “wishy-washy”.

It reads: “Limerick City and County Council has appointed technical advisors to progress planning and design work on the proposed scheme. In line with best practice, the scheme design will carefully consider environmental and physical constraints, as well as land ownership patterns with a view to mitigating, insofar as possible, impacts of the scheme on individual land holdings.

”It is anticipated that the first public consultation on strategic routing will take place later this year.” Deputy Collins said all he wanted was “a simple answer to a simple question”.

“Is the original M20 route going to be the chosen one as Taoiseach Leo Varadkar has said. If it is why can’t they just say that? Or is it the case that alternative options are being looked at after Minister Ross asked them to do so," said Deputy Collins. There have been calls for a shorter motorway in east Limerick to connect the two cities via the M8 at Cahir or Mitchelstown.

Connecting Cahir to Limerick would prove a much cheaper option for the M20 motorway, according to the Cork-Limerick Alliance Group.

They believe the current plans for the road will cost taxpayers too much. The proposed M20 route from Limerick to Cork is set to cost around €950m.

Deputy Collins said it is time for the TII to dispel all these rumours once and for all. “People on the route have been left in limbo,” said Deputy Collins.

In the letter to the Limerick TD, the TII said: “The scheme is at an early stage of development and it is not, therefore, possible at this time to indicate a likely timeframe for construction of the project which will, of course, be dependent upon the satisfactory conclusion of the statutory planning approval process.”