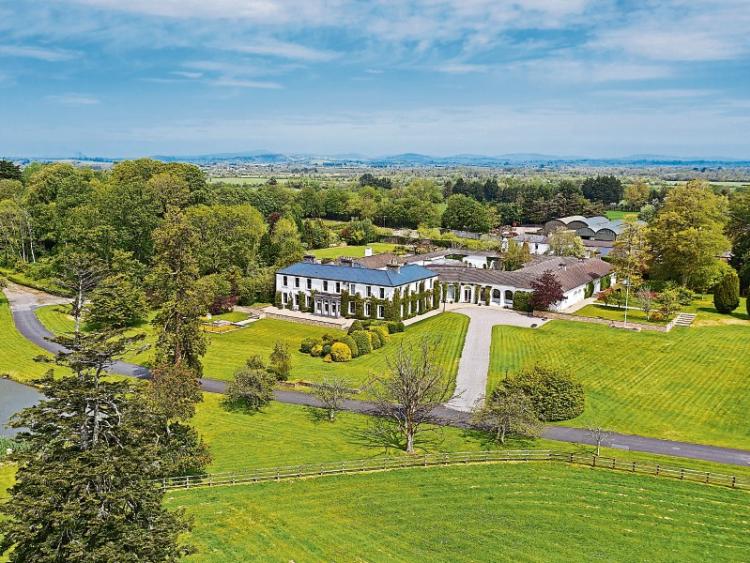 LOCALS in Knocklong don’t have to wait too long more to find out who the next owners of Kilfrush Stud will be.

The auction of the stunning Georgian residence together with manager’s house, gate lodge, staff houses and 73 boxes standing on 286 acres of top class land goes is up for auction next week.

Paddy Jordan, of Jordan Town & Country Estate Agents, will be the man with the gavel at 3pm in the Dunraven Arms Hotel on Wednesday, July 24.

The last three owners have been Irish American businessman John A Mulcahy; Paris-based businessman Jean Pierre Binet and Qatari businessman Mubarak al-Naemi. Mr Jordan confirms that there has been both international and Irish interest in Kilfrush Stud.

“It has been good. It is a very nice place. It is entitled to be of interest. Hopefully things will go according to plan,” said Mr Jordan this week. He says those from both business and equine backgrounds have made enquiries.

While the auction date, time and location is fixed there is still the possibility of Kilfrush Stud being sold before next Wednesday.

“Never say never. It has happened before that stuff has sold before auction so I wouldn't rule it out. You rule nothing out in auctioneering,” said the experienced campaigner. Mr Jordan is guiding in excess of €5.5m. He remains tight-lipped on whether he expects it to go above that figure.

“It all depends. You’re playing poker to the last minute really as to who appears and doesn’t appear. One would expect it to achieve that level,” said Mr Jordan.

He describes Kilfrush Stud as “one of the finest estates to come on the market for some time with a classic pedigree having bred over 80 Group and Stake winners”.

Kilfrush Estate House dates from around 1835. It was built as part of a larger demesne for Joseph Gubbins, who was the landlord and later to become High Sheriff of County Limerick in 1863.

Modernisation has been tastefully inkeeping with the Georgian style. The main residence includes four reception rooms, kitchen, wine cellar, various utilities and four principle bedrooms all ensuite. There is also the guest/ leisure wing which includes three bedroom suites, swimming pool, gym, hot tub and sauna.  These were added for the visit of President Richard Nixon, who was invited by Mr Mulcahy.

He isn’t the only person of global standing to grace the halls of the property located outside Knocklong.  Princess Caroline, the eldest daughter of Prince Rainier III of Monaco and Grace Kelly, was a visitor during Mr Binet’s time as the owner. Who will be the next one?