Limerick parish revs up for festival and fun soapbox derby 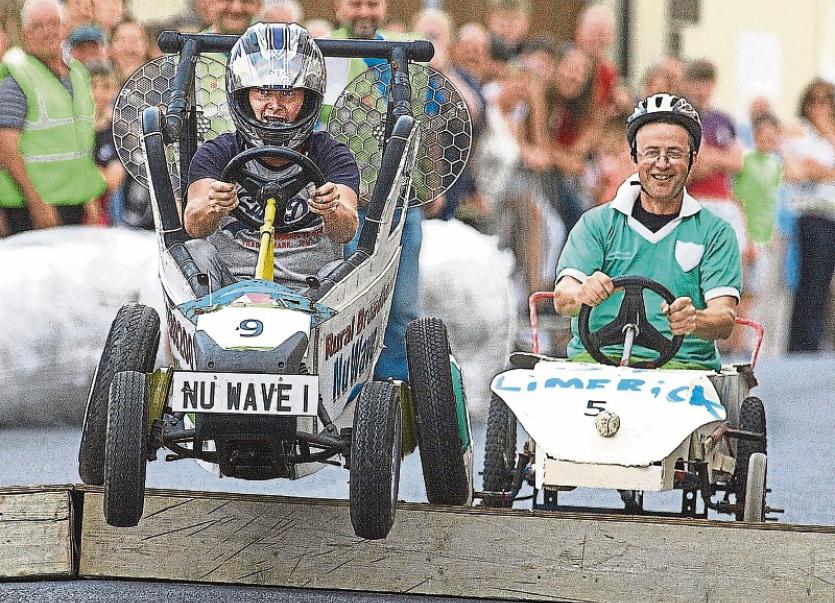 TOM Jones, chairman of Kilteely-Dromkeen Community Festival, said all they are trying to do is organise “a good fun weekend”.

“There is great community spirit here. We are just trying to showcase what we have as a community and how we can represent it together as a group,” said Tom. And they have another fantastic weekend planned from this Friday, July 19 to Monday, July 22.

The highlight is the St Ailbe’s Credit Union soapbox derby on Sunday afternoon at 3.30pm. Amazingly it is the eighth annual event. At the beginning nobody knew what it was. Now they know to expect thrills, spills and crashes as the handmade karts hurdle through Kilteely village

“We already have 16 karts registered. We are going to have an individual time trial – the fastest eight will go one-on-one to see who will win it. The bottom eight will go into the shield final so everyone has an opportunity to win something. The St Ailbe’s Cup goes to the overall winner and the prestigious Siobhan Ryan memorial cup goes to the fastest local driver.

“This year, drivers who haven’t built a kart can still take part. Tim Tierney, from Knocklong, who makes go-karts, has given us six. It’s on a first come first served basis,” said Tom.

But the soapbox derby is only one part of the four days. Friday night kicks off with a fancy dress parade, family fun activities, bingo and skittles. Saturday dawns with GAA and handball tournaments. Then history lovers are in for a rare treat.

At 3pm, Edmond O'Dea and Bosco Ryan commence a historical walk and talk at The Teach, Cloverfield on the murder of Richard Roach. The first murder of an Emergency man in Ireland during the land wars of the 1880s in Ireland occurred in Cloverfield on April 17, 1882.

Edmond said: “The talk will look at the circumstances around this murder, the context in which the murder took place and the aftermath of the murder including the blood tax imposed on the people of the area. The walk will trace the routes taken along the road on that fateful evening along with exploring the landholders and householders of the wider Dromkeen area at that time.” Talk commences at 3pm with the 6km walk beginning at 4pm.

Saturday night features music from Willie Bunn in the street and locals will take part  in the final of Inlaws, Outlaws, Friends and Foes. Tom said there is a great buzz about this as it their take on the Mr and Mrs TV show. “We’ve had two semi-finals and we have five duos including friends, couples and brothers going for first prize,” said Tom. Hanly’s and Ahern’s have top class music acts every night.

The build up to the soapbox derby on Sunday includes farmers’ market at noon, dog show at 12.30pm and family fun day from 1pm in the village.

Tom, who praised his hard-working committee, said: “This is our 11th year now and it is growing every year. I really think there there is something for all tastes from the historical talk to the derby and everything in between.Great thanks must go to the whole community because the whole community rows in behind this and without their co-operation none of this would actually occur at all.”

See the Kilteely-Dromkeen Facebook page for full details and times