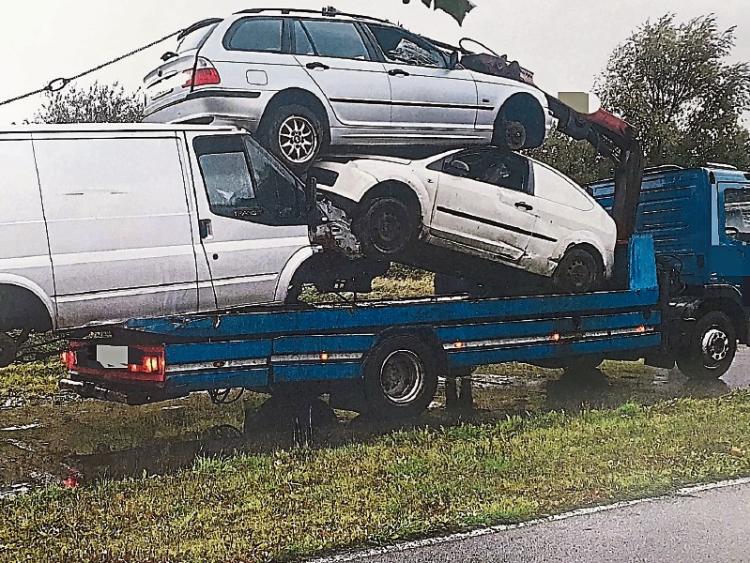 A JUDGE has described a man’s “shocking” attempts to secure two cars and a van on a recovery truck in Limerick city centre as “something you would build with Lego”.

Barry Quilligan, 30, of Ballyphilip, Banogue, Croom, appeared before Limerick District Court charged with failure to secure a load on his recovery vehicle on Parnell Street on September 20 last.

Garda Patrick Melody, of the roads policing unit, said that the truck was “weaving” from side to side and that the accused had attempted to secure the three vehicles with a single chain “going from front to rear”.

Giving evidence, Gda Melody told Judge Marian O’Leary this Monday that that load was not properly secured and that there were “no warning signs”.

Observing photos of the load, Judge O’Leary said: “This is shocking.

“This looks like something you would build with Lego.”

Solicitor Sarah Ryan said: “He said that he had pulled it [the chain] in such a way that the vehicles would have stayed tight.”

Before adjourning the matter for an hour, the judge said she was “appalled” and that he was “very lucky” that there were no pedestrians nearby.

After the adjournment, Mr Quilligan sat in the witness box to give evidence. Ms Ryan asked him if he accepted that he was wrong. He replied: “I thought it was secured with the chain. I am sorry, your honour.”

He said he has been working in this business for five to six years.

“What should you have done?” she asked.

He replied: “I should have done two loads.”

Mr Quilligan explained that he was asked to recover the three vehicles “as quickly as I can”.

“You were putting your livelihood on the line,” the judge told the accused, later adding: “This is something out of Lego Land.”

Prosecuting sergeant Sean Murray informed the judge that the maximum fine for the offence was €1,000 and a disqualification was at the court’s discretion.

“I would be very happy if you gave me a fine. It won’t happen again,” the married father of two said.

“You would be very happy?” the judge replied.

“I don’t think that is what he means,” Ms Ryan said.

Judge O’Leary said to Mr Quilligan: “You have two children. God forbid if this fell on top of them, or on anybody. This is reckless behaviour.”

Mr Quilligan was fined €800, with seven months to pay, and a three-month disqualification.