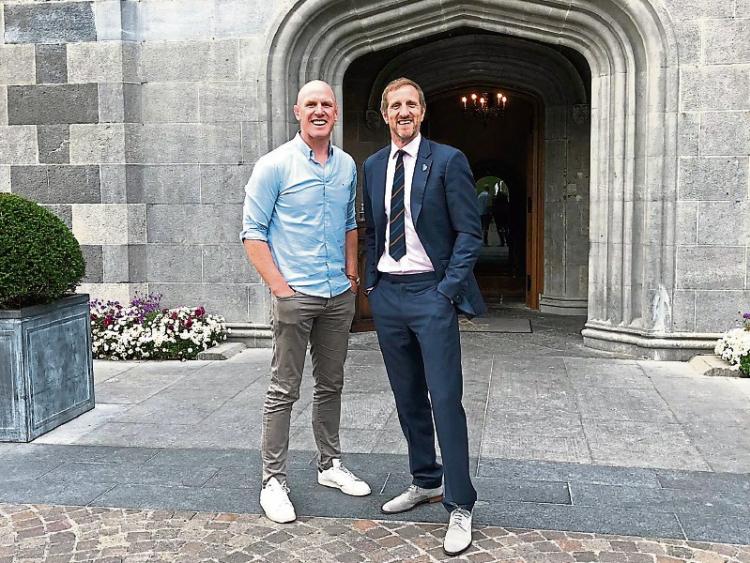 Paul O'Connell and Will Greenwood at Adare Manor

ADARE Manor had a special visitor in the form of former England rugby union player Will Greenwood.

The former Leicester Tigers and Harlequins player was in the County Limerick town for 24 hours, where he met local rugby legend Paul O’Connell.

He took to Twitter where he posted a picture of himself and Paul. He also used the tweet to praise the Adare Manor for their “unbelievable hospitality” and described the golf course as being “truly sensational”.

Greenwood, a colossus at centre in his day, also posted a video of himself playing golf at the adjoining course.

“The tweet read “The most stunningly beautiful amazingly insanely awesome golf course and hotel. If you get the chance.... you have to go! 60 yard wedges, my absolute favourite.”

The most stunningly beautiful amazingly insanely awesome golf course and hotel.. @TheAdareManor
If you get the chance.... you HAVE to go!!!! 60 yard wedges... my absolute favourite.. ❤️✅ pic.twitter.com/TBKE6NCjmu

During his career, Greenwood earned 55 England English rugby union caps and scored 31 tries. He announced his retirement at the end of the 2005/6 season.

After his retirement, he found a job working as an analyst for Sky Sports and regularly appears on 'The Rugby Club' and live premiership matches, as well as being (with Scott Quinnell) the co-presenter of the School of Hard Knocks, Sky TV series.

A host of stars will descend on the Adare Manor for next year’s JP McManus Pro-Am.

The event takes place on July 6 and 7 in 2020, and will be for the benefit of charities around Limerick and the Mid-West region.