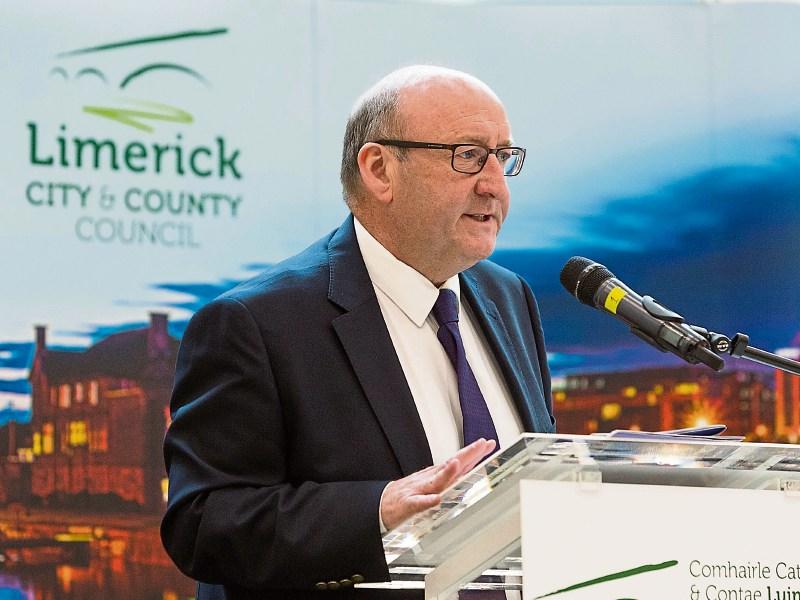 THERE were words of praise and standing ovations for Conn Murray this Monday at what was his last meeting as chief executive of Limerick City and County Council.

Mr Murray, who took up the position seven years ago, is due to retire from local government after 40 years next month.

The current deputy chief executive, Dr Pat Daly, will take over the position until the job is advertised, if it is. Much depends on how quickly the elected mayor position becomes a reality.

But it was really Conn Murray’s day as the leaders of all the parties praised the vision, leadership and new investment he had brought to Limerick during the past seven years.

The tributes were led by Deputy Mayor Adam Teskey who said Limerick was a very different place when Conn returned to Limerick. It was he said a city and county that was getting back on its feet after the economic recession, recovering from challenging social problems and divided, from an administrative perspective.”

Conn, he said, had lead the amalgamation of the two councils and he was  one of the “key architects of the incredible economic renaissance" of  Limerick.

“It was a time that we needed courage and creativity and Conn Murray brought this in abundance.”

Cllr Kieran O’Hanlon, on behalf of the Fianna Fail party, said Limerick was fortunate to have had somebody of Conn’s calibre, a man with  management skills to lead a team, and a strong team player.

“You came here with a vision for Limerick and I believe that legacy will go on for a long long time.”

He told Mr Murray, “You can walk away with your head held high for what you have done for Limerick.”

In his farewell speech, Conn Murray said that change is not something that comes easily but is inevitable. “While change is inevitable, progress is not.”

Progress needs determination and leadership and the council in facing its challenges and making bold and brave decisions had demonstrated those qualities, he said.

“There have been tough times, even dark times but these disappear in the light of the achievements we have made,” he continued.

He paid tribute to council staff and to his executive colleagues whose support had never wavered and said it had been a privilege to make a career in the public service.  “I am delighted Dr Pat Daly will be stepping into these shoes.”

A Beatles fan, Conn Murray ended with a quote from John Lennon: “I know I am a dreamer but I’m not the only one.”

Read also: Where does Limerick rank for luck in the lottery?