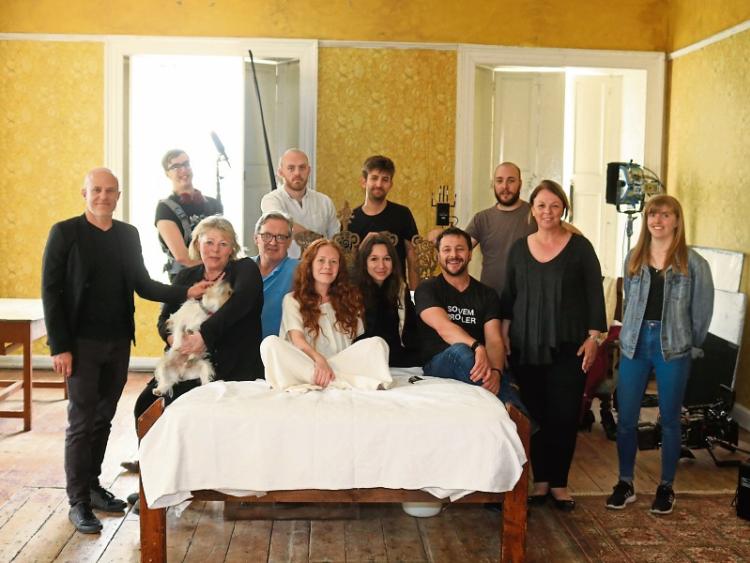 Cast and crew of The Yellow Wallpaper in The Kennedy Rooms

BRUFF is set to be the scene of a new period movie, as American and Irish film production teams come together.

Hysteria Pictures based in Stockton, California in the United States of America and Emerald Giant Productions (EGP), based in County Clare are coming together to co-produce the film, The Yellow Wallpaper.

The project is being led by Kevin Pontuti who is directing and producing along with his partner, Alexandra Loreth, who is producing and also acting. Emerald Giant Productions is led by producers Sylvia Moore, Rob Gill and Zeb Moore.

The Yellow Wallpaper" is a film which will be based on the short story by American writer Charlotte Perkins Gilman. The story was first published in January 1892 in The New England Magazine.

It was originally meant to be filmed in both the States and Ireland. With half the filming taking place in each country,” said Mr Moore, “but the decision was made to shoot it entirely here, in Bruff and the surrounding areas. Which is great for us and great for the locality as it means we are bringing all that America money here to Limerick,” he added.

The exact budget of the film remains a secret, but is expected to rise into the hundreds of thousands.

The two production teams met in Limerick in 2017 at the Richard Harris International Film Festival (RHIFF), which is run by the founders of EGP, and where Hysteria Pictures had a short film screening as part of the festival’s yearly programming. From there, the relationship blossomed into a co-production of The Yellow Wallpaper.

“It is really exciting to be bringing these companies over. And it is great to say it is because of the Richard Harris Film Festival,” said Mr Moore.

The filming in Ireland will see a production team of around 20 people. This involves a positive gender balance with 60% of the team being women, an important factor to a story which was regarded as an important early work of American feminist literature.

The film will be shot in a number of locations around Limerick and Clare, with the main set in Bruff, in The Kennedy Rooms, the former FCJ convent.

Manager of the The Kennedy Rooms, John Fitzgerald, says the shooting of this film marks the beginning of ‘exciting times’ for the area.

“It will be the first of many projects filmed here, we have more in the pipeline. It’s great and an ideal location for certain types of movies. And it’s great for the community. We will have around 30 people on set here over the next few weeks. The people involved in the filming will be staying in Bruff, It will be good for the pubs, cafes and that in the area,” said Mr Fitzgerald.

“It’s busy here at the moment. Some of the crew are here and more are coming at the weekend. We are building sets at the moment and developing the whole set.

“Basically we are creating the yellow room, with the yellow wallpaper, in the old part of the building,” he added.

The film is expected to be released in early 2020.

Read also: Here's how to get involved in Limerick's 2019 Culture Night