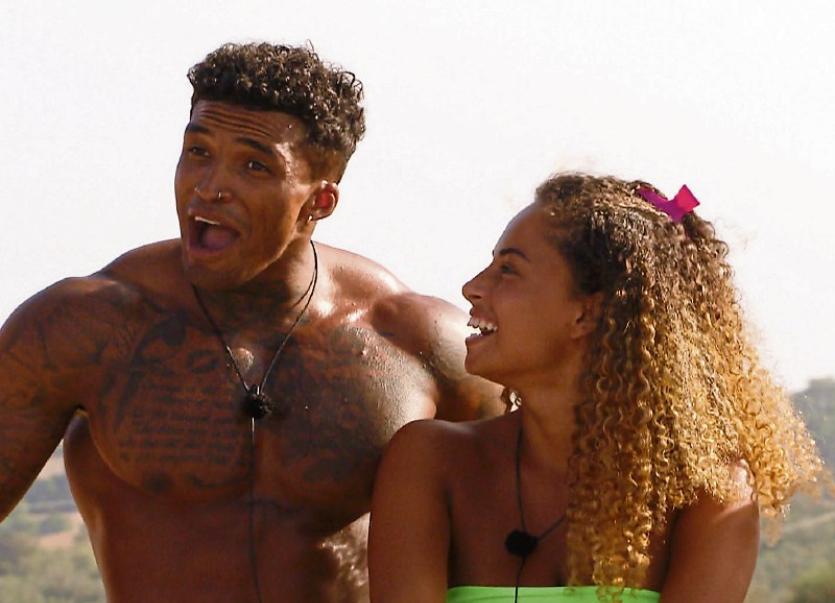 After the explosive Recoupling, Amber has kept her distance from Michael’s new partner Joanna. However, Amber and Joanna are about to get better acquainted with one another as they head out of the villa for a catch up.

The pair sit down to enjoy a cup of tea and air their differences but initially they both sit there in silence.

Joanna eventually initiates a conversation. She says “I’m going to be the bigger person…”

Amber interrupts Joanna and says “The bigger person? What have I done?”

Joanna says “I don’t want there to be tension in the villa. I know that we’re not going to be the best of friends. This is the perfect opportunity to have it out and then we’ll squash it and be on good-ish terms in the villa.”

Amber wants Joanna to know how it felt walking into the villa and finding out that Michael had recoupled with another girl. She says “It was a pretty s**t situation for me to walk in front of everybody by myself. To stand there and look at Michael coupled up with you. That wasn’t nice. It hurt my feelings a lot.”

Joanna says “Absolutely. I felt for you.”

Can Amber and Joanna resolve their differences and begin to build a friendship? And will Michael and Amber ever be civil after the recent Recoupling?

AMY WANTS ANSWERS FROM CURTIS BUT IS THIS THE END OF THE ROAD FOR THE HALF BOYFRIEND AND GIRLFRIEND?

Amy is still left saddened by the recent Recoupling, as while Curtis chose to remain loyal to her, he has since confessed he had feelings for new girl Jourdan and wanted to couple-up with her.

On the swing seat, Jourdan fills Amy in on her conversations with Curtis while she was in Casa Amor.

As Jourdan brings her up to speed, Amy adds to a list of questions on her villa phone, which she plans to ask Curtis later on.

Later that evening, Amy decides it’s time to confront Curtis and get answers.

On the sun deck, Amy says to Curtis “I’m going to read stuff off my phone as a prompt. It’s not that it isn’t from my heart because it is. I want this to be the last conversation we have about these issues.”

Amy says “I don’t think you ever actually liked me at all.”

Amy continues “I feel like I was an acceptable placeholder until you found someone better. You did but then she [Jourdan] coupled up with Danny so you came back to your back-up plan.”

Curtis continues to listen to Amy as she expresses how she feels. Amy says “I don’t think you actually fancy me. You’re having meaningful snogs with other girls when I’m not here. How is that ok?”

Amy then says “For me, absence made the heart grow stronger. For you, it was out of sight, out of mind.”

Amy says “You knew this would break my heart and you still did it.”

Amy replies “Exactly. That is what I held on to at Casa Amor and you still went behind my back and got with someone else.”

Curtis says “You don’t ever back yourself? I do like you and I can see a future with you. Everything I have said to you I have meant.”

Can Amy and Curtis get back on track? Or is it the end of the road for the half boyfriend and girlfriend?

LUCIE STILL HAS FEELINGS FOR TOMMY, DESPITE RECOUPLING WITH GEORGE

Before heading to Casa Amor, Lucie made her feelings for Tommy known. However, it appeared she was moving on after returning to the villa with new boy George.

Lucie asks Tommy for a chat and explains she still has romantic feelings for him. At the fire pit, she says “I do want to get to know George but you can’t really change how you feel. I’ve known you for how many weeks now?”

Tommy replies “You can’t switch those things off.”

Lucie says “It’s still going to be there. I don’t want you to feel awkward and feel like you can’t talk to me.”

Tommy says “Regardless of what has happened, I still want the friendship there. I don’t want to lose that.”

Lucie then says “I just feel stupid because at the start I don’t know why I didn’t choose you.”

But Lucie and Tommy’s chat hasn’t gone unnoticed by Molly-Mae. Speaking with the other girls on the swing seat, Molly-Mae says “Tommy and Lucie are having a chat over there. I think she does still really like him.”

Jourdan says “Is it a bad thing that she fancies him?”

Molly-Mae feels as if she has been kept in the dark about Lucie’s ongoing attraction towards Tommy. She says “I don’t mind that she fancies him. I can’t get annoyed for someone fancying him. There are no rules about that but it’s how you go about it. Open up to me and be honest about it.”

Molly-Mae reflects on the situation in the Beach Hut, she says “It’s very strange that I was sat with Lucie in Casa Amor and to find out she was sat there thinking about Tommy. It doesn’t worry me but obviously it bothers me.”

Will Lucie be able to switch off her feelings for Tommy and move on with George?

A NEW LOVE TRIANGLE DEVELOPS, AS ANNA IS LEFT TORN BETWEEN JORDAN AND OVIE

After returning to the villa from Casa Amor with Ovie, Jordan was left single but Anna was surprised to see he had remained loyal.

Jordan has picked up on the fact that Anna may still have feelings for him. Speaking with the boys, Jordan says “I feel like since she has come back in to the villa, the chemistry is still there. The eye contact is mad.”

The boys encourage Jordan to still try and pursue a romantic relationship with Anna. Tommy says to Jordan “Go for it.”

Jordan reflects in the Beach Hut about his next move. He says “I always back myself but it’s good to know the boys are backing my decision. It was good to get the go-ahead from them as well.”

Later that evening, Jordan asks Anna for a chat at the fire pit. He says to Anna “I’ve missed you.”

Anna says “I feel like I did miss you but I didn’t realise how much I missed you or how much I liked you until I saw you. It’s now really hard for me to see you. But it seems like it’s really easy for you.”

Jordan is keen to reassure Anna that he still has feelings for her. He says “It’s not. Why did you think I came to cuddle you in the bedroom today? I wanted to give you a cuddle and make sure you were alright.”

Jordan continues “When you were gone it made me realise how much I actually liked you.”

Anna asks “So, you don’t want to crack on with anyone else?”

Jordan replies “I wanted to prove you wrong and prove that I did like you. I don’t say things if I don’t mean it.”

Anna says “I’m surprised at how you acted and how much you like me.”

But Ovie has picked up on the fact that Anna may be feeling torn between him and Jordan and he is keen to know where her head is at.

Ovie asks “I just want to know what’s going on in your mind. What are you thinking?”

Anna replies “It was weird for me coming out with you and him being on his own. I was shocked. I felt really bad. I did like him and I can’t switch it off just like that.”

Ovie says “Since I’ve met you, we’ve just really got along. I feel like since you’ve got back and seen him, your whole energy changed.”

But who will Anna decide to continue her Love Island journey with?