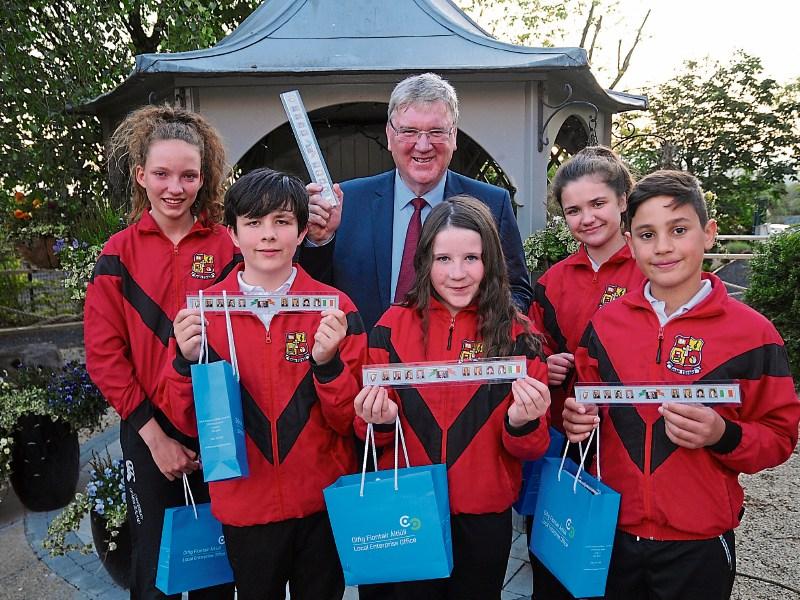 NATIONAL school students from Adare are celebrating after Supermac’s supremo Pat McDonagh agreed to stock their unique Presidential ruler in his retail outlets.

Sixth class pupils at Shountrade National School were invited to attend the regional final of Ireland’s Best Young Entrepreneur at the Castletroy Park Hotel in recognition of their efforts to design and market the ruler, which  features all nine Presidents including the incumbent, Michael D Higgins.

Pat McDonagh, who employs thousands of people through Supermac’s and a number of motorway plazas was guest speaker on the night – and he was so impressed with the product, he agreed to stock it there and then.

Speaking to the Limerick Leader, he said: “I’ll be giving them the first order when they are ready, for the Obama Plaza, and our other outlets, because I think it would be a good tourist item to sell. It’s at the right price too.”

The idea for the ruler – which retails at €4 – came when Shountrade student Eric White, 12, was travelling home from America last summer and saw a ruler featuring the former Presidents of the USA.

Mr McDonagh added: “It’s a great idea and it could be utilised for many a purpose. For sporting people, and local dignitaries, and people who are newsworthy. Not alone is it suitable for use as a ruler, but if you were to ask 100 people to name the nine Presidents of Ireland, I’d say if you got a 10% success rate, you’d be lucky. This is going to make it so easy for people to remember. It’s novel, and it will go well for tourism and local use.”

Shountrade NS principal Elaine Lyons said her students were delighted at such a ringing endorsement from serial entrepreneur Mr McDonagh.

”One of the best things about the night is that the children got first hand experience of such a wonderful entrepreneur whose background was in primary school teaching. His story was very interesting and tangible. The children went away and we asked them what they thought, and what stood out was that Pat said there is a lot of hard work involved,” Ms Lyons said, “And I said: ‘that’s exactly what it takes to be an entrepreneur.”

She is making further contact with Mr McDonagh this week, with a view to having the product stocked in the Obama Plaza and elsewhere later this year.

The idea for the presidential ruler was developed as part of Shountrade’s junior entrepreneur programme.

The pupils won the Star Submission award, beating 600 other national schools across Ireland.

Their enterprise netted them €1,697.50 in initial profits out of which they donated money to develop a new sports field in the school, as well as an adult autism unit following a special request by the ruler’s developer Eric.