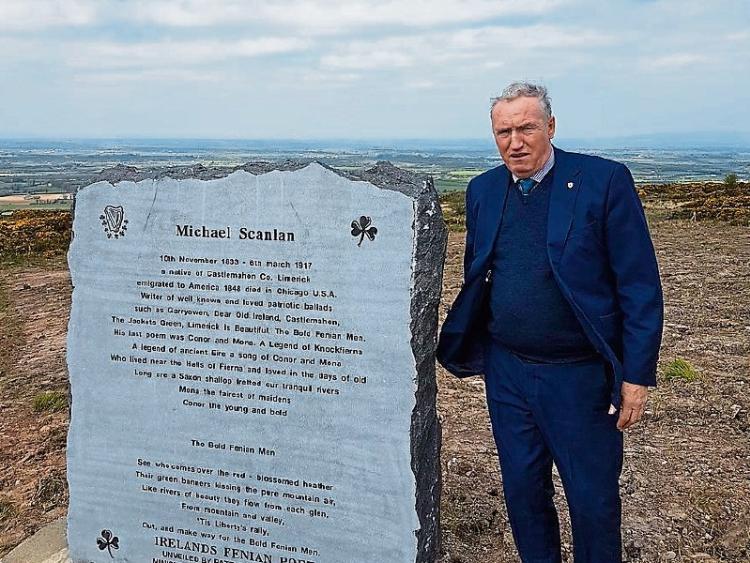 THE rich heritage and lore of Knockfierna Hill, as well as its more tragic past, are to be recounted for posterity on a series of limestone plaques along a 100-foot long stone wall on the approach to the hill.

The wall and plaques are just one of a number of major initiatives being undertaken by the Knockfierna Heritage Society. And, according to the society’s chairman, Pat O’Donovan, they hope to have the work completed well in time for the annual Lughnasa ceremonies on the hill.

“The work is underway and should be ready by next month,” he said. “The wall is currently being erected and the limestone plaques will remember the events of the famine and the decline in the population on the hill as well as  the flora and fauna of the hill of Cnoc Firínne (the fairy hill). There will also be various sean-fhocail recorded.”

Further along the trail into the hill, another major initiative is also taking shape. This is the erection of four large limestone memorial stones to the deceased poets of Limerick City and County.

Already in place is a large memorial stone to Michael Scanlan, who left  Castlemahon in 1848 and was known as the Fenian poet. Aindreas McCraith, one of the famous Maigue poets, is also remembered in a memorial stone in an area of the hill now known as The Poet’s Way.

A new car park is also being created with link fencing to facilitate approximately  40 cars close to the Rambling House at the entrance to the hill, Mr O’Donovan added.

“All this work has only been made possible through the generosity of people who support our church gate collections and our fund-raising calendar,” he said. “We are deeply appreciative and hope that people will come to see how the money is being spent in preserving the history and heritage of this very significant site.”