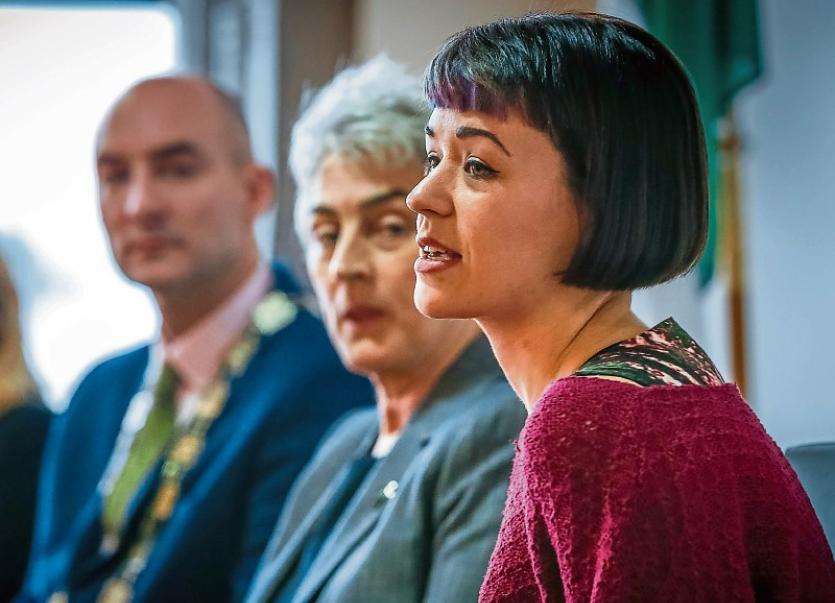 Emma Langford at a mayoral reception at City Hall

CRITICALLY-acclaimed and award-winning folk sensation Emma Langford will headline this year’s Limerick Summer Music with an exclusive collective of musicians, her biggest hometown concert to date.

The Caherdavin songstress, who just completed her Quiet Giant tour in Germany, will bring an orchestra-like line-up to the stage at the Rosbrien Pavillion, Old Crescent on July 12, and will perform — for the first time ever — her 2017 debut full-length album with a full band.

The 29-year-old RTE Radio 1 Folk Award-winner will also launch her new single, which forms part of her sophomore album, on July 12.

The highly-anticipated sequel is being produced by Grammy-nominated The Production Suite in Dublin.

Looking forward to the summer concert, she said: “I can’t wait. We’ve had the experience of playing the songs across Europe over the past year and a half now, and I feel like we’ve really grown into them a bit more as a band. We’ve put together some beautiful new arrangements, plus we’ll be joined by some very special guests, so that’s going to add a whole new dimension to the show.”

It's finally officially out there in the big wide world - news of my homecoming, my biggest Irish show yet.

The launch of my new summer single.

Ahead of the hometown gig, the folk musician said she admits that she feels out of her depth at times, with no record label, manager or agent to take on some of the workload.

“It’s hard seeing huge shows run by huge promoters that sort of squash independent artists into smaller venues... It’s a big undertaking, coordinating and promoting a show like this, but I think it’s important to show that it can be done. I have really excellent support in the Limerick Summer Music committee - Michael Murphy is my man on the inside there, he’s known me since I was a kid, when I worked at the University Concert Hall. Plus my friends, my bandmates, my family - and Limerick almost always have my back! So I’m never really on my own with any of it.”