Limerick candidate complains of blackguarding after posters are ‘torched’ 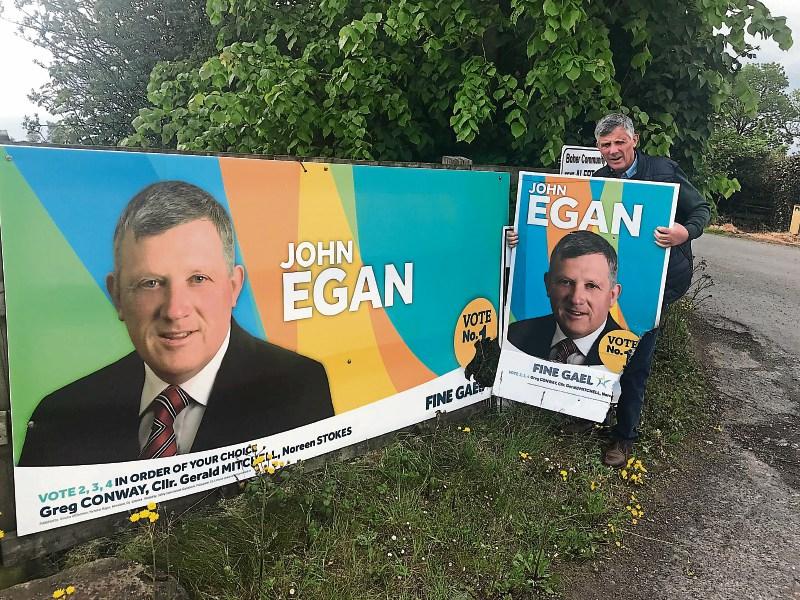 John Egan: “I don’t know what is behind it nor do I want to know. It is blackguarding. It is not nice."

A LOCAL election candidate said three of his posters have been “torched” in the past week.

“The one in Doon was badly torched and only for people coming on the scene in Abington and Boher they would have been burnt completely. In Abington they were seen to be setting it alight and they drove away. It is very easy to put those posters on fire. Thankfully the two were put out quickly by people using bottles of water,” said Mr Egan.

There could have been serious consequences if it spread, said the Murroe-based candidate.

“They were on timber fencing erected by the county council. If the fence had gone on fire that could have led to cattle breaking out,” said Cllr Egan.

It could be the same person but he doesn’t know.

“I don’t know what is behind it nor do I want to know. It is blackguarding. It is not nice. All the candidates going for local election are working in the interests of democracy and this is no way to be treating them. In fairness all the candidates are doing their best,” said Mr Egan.

Separately, gardaí are investigating a burglary that occurred at the Spar shop on Main Street, Murroe, on Saturday, May 18, between 3am and 4am.

“No arrests have been made and the investigation is ongoing,” said a garda spokesperson. It is not known what if anything was taken.

It is the second time in two years that the shop has been targeted by criminals. In April 2017, the popular shop owner was tied up and threatened by armed raiders.

Four men broke into his house. At least one had a firearm. They got the keys of the shop and codes for alarms. Two of the raiders then left and went to the shop while the other two stayed at the house. After some time the two raiders, who stayed at the house, left and the homeowner managed to free himself and raise the alarm. Cash and cigarettes were stolen.

Mr Egan said there has been a lot of anger in the parish over the shop being targeted for a second time.

“It is the heart and soul of the community. The owner is fierce popular in the locality,” said Mr Egan.