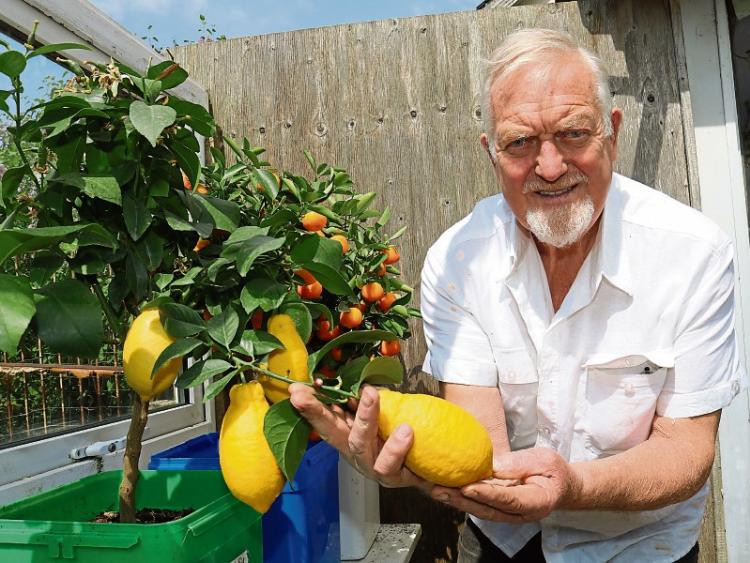 MIKE Condon was left with a sour taste in his mouth when a woman laughed at him while he was buying a lemon tree in Lidl.

“She said, ‘You’re wasting your money. You can’t grow lemons in Ireland’. I said, ‘Watch me’,” recalled the pensioner with a wry smile.

The proof of the lemon pudding is in the photograph. They look like they are from the Amalfi Coast but instead were grown in a tub perched on a window sill in Pallasgreen.

“They are twice, maybe three times the size of the ones you would get in a supermarket. You should feel the weight of them. I only bought the plant two months ago,” said Mike.

He admits he has been trying to grow lemons for the last five or six years without much success. However, this year his plans came to fruition.

COSTA DEL PALLASGREEN Wudja look at the SIZE of these lemons! This is Mike Condon, and when he was buying his lemon tree in Lidl, he was told he could never grow lemons in Ireland. He replied: “WATCH ME.” Now, he has the biggest lemons in the land. For more on Mike’s story, pick up this weekend’s Limerick Leader. . A juicy story by Donal O’Regan and sweet shot by Michael Cowhey . . . . #HowJaLikeThemLemoms #BitterSweet #MyLemonsAreBiggerThanYours #Limerick #CostaDelPallasgreen #Pallasgreen #FollowTheLeader

“I have grown them before in a glasshouse but they didn’t fruit so well. I found out what was wrong from a citrus fruit farm in East Sussex. They said you have to prune them very hard. You think you should let them grow but you have to prune them back to the stem nearly. It is the young shoots that produce the fruit it seems,” said Mike.

The other mistake people make is over watering.

“It kills them. I have only watered them once. About once every three or four weeks is all you water them. They have never been in a greenhouse. They are outside the whole time. What is good for them is sunshine. I’ve been trying it for five or six years and they have never grown this big. They are a colossal weight,” said Mr Condon, who is aged in his 70s.

Of course the recent dry and sunny weather has helped but he says there is a mentality that we can’t grow certain fruits in our climate.

“I have grown peaches, lemons, kiwis and satsumas here in Pallasgreen. There is nothing stopping us growing kiwis – they are grown in New Zealand which has a climate similar to our own.”

The next question is what he plans to do with his crop from three bountiful trees?

“Put a big slice in to a gin and tonic for my wife Joan,” he laughs.

“I haven’t actually tried one yet. I’m trying to get them sold in a shop and call them Limerick lemons,” said Mike.

Any monies raised will go towards his charity work in India. Every year Mike and Joan  deliver clothes and footwear to orphans and street children.

“Sports tops, shorts, boots, jeans, T-shirts. It is like all their Christmases have come at once when we give them out. They have nothing. They live in cardboard boxes on the side of the road,” said Mike, who accepts donations of clothes and pays the cost of sending them to India himself.

The father-of-three is a well known character and community man. He was Bruff RFC’s very first hooker. Green-fingered Mike said his hobby and passion is nature and gardening.

“I enjoy it and enjoy talking to people who ask you questions. I tell them what I am doing. Now I mightn’t always be right! The time I had peaches growing I got phone calls from all over the country about them but then one of the storms uprooted a lot of my stuff.

“Everybody wants to chat and have the craic about the peaches, satsumas or lemons. It is better to be taking about them than politics!” said Mike.

Speaking of which, many local and European election candidates will have a bitter taste in their mouths after the votes are counted this weekend.