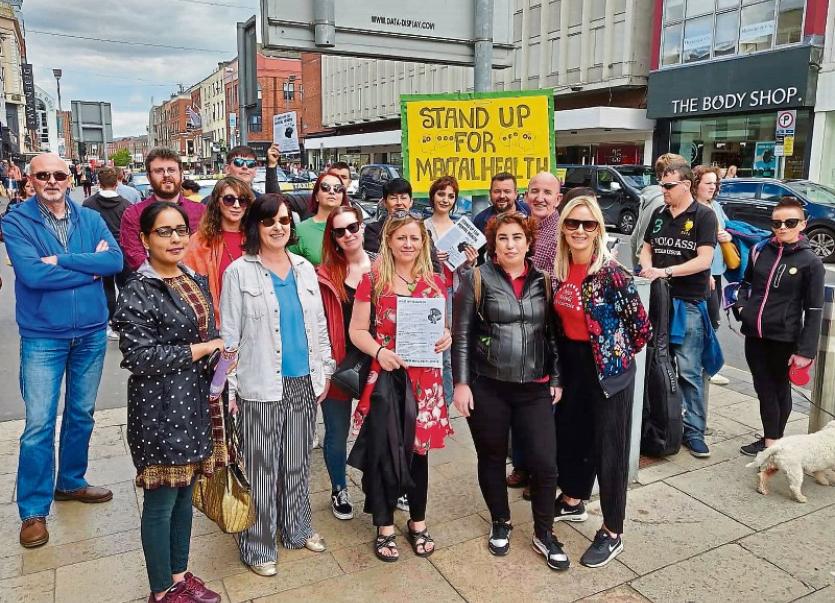 The new group at a demonstration in Limerick city

A NEW lobby group has been established to fight for improved mental health services across a range of areas in Limerick.

Stand Up For Mental Health (SUFMH), which held a day of action in Limerick city on Saturday, is calling for a mental health awareness programme to be rolled out in schools; a permanent base for suicide patrols with a 24-hour on-call crisis counsellor; and funding to alleviate waiting list times.

“Limerick is a black spot for depressive illnesses, self harm and suicide. While there are many wonderful organisations trying to alleviate the crisis, we need a strong campaign group that demands practical action and solutions.

“We have already succeeded in getting the council to pass a motion to seek permission from the Minister for Mental Health, Jim Daly to implement a proven mental health awareness programme into all schools in the city. We cannot let the Minister rest on his laurels with this. We will also be sending him a formal invitation to visit Limerick, so he can witness the devastation for himself,” she said.

Ms Ni Shiomoin is a local election candidate in Limerick City West for the Solidarity party, which initiated this lobby group.

“We need practical solutions. Our current politicians are doing nothing to help Limerick and other areas devastated by the mental health crisis, so we need to force them into action! An organised, grassroots movement is the only way to achieve this,” she said in a statement this week.