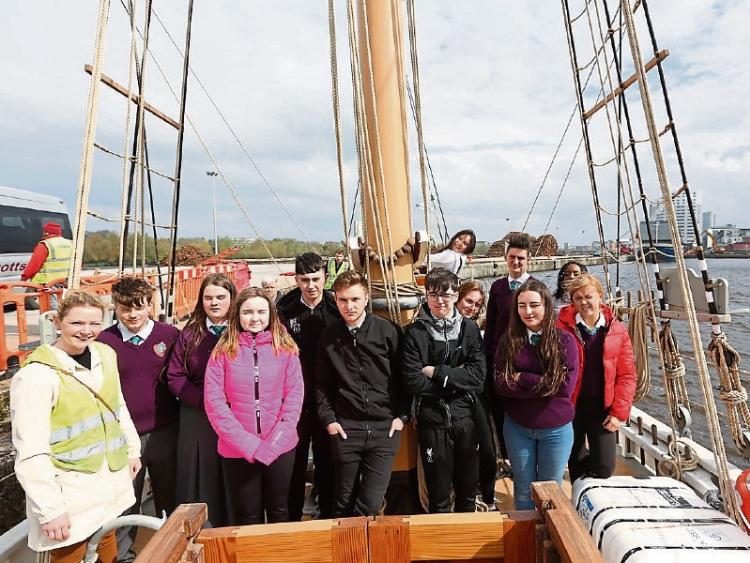 Students from Thomond Community College on board the Ilen on the river Shannon PICTURE: Deirdre Power

AS RIVERFEST 2019 gets underway this weekend, work will also begin on the “biggest canvas ever painted in Ireland” as part of a truly unique community educational programme, taking its theme from Limerick riverine and sea traditions.

On Friday, in the nave of St Mary's Cathedral, Limerick artist Martin Shannon will lead students from Thomond Community College through the impressive process of painting the big square sail of the Ilen, the last surviving wooden ship to voyage the Shannon.

Brought back to life, largely due to the work of Gary McMahon, who “constantly” worked on the Ilen Project at the LEDP workshop in Roxboro over a number of years, the ship returned to Shannon waters last October after 92 years.

On May 3, a newly designed graphic, inspired by ancient Celtic and Inuit folk art, will be adorned on the sail of the historic vessel in bold red paint ahead of its upcoming voyage into the North Atlantic this summer.

The event, which is free and open to the public, has come about as a result of the Salmon’s Wake programme, the Ilen Project’s ongoing community and schools educational programme.

“Salmon’s Wake is a programme which encompasses many aspects of Limerick life,” explained Deirdre Power, education and project facilitator with the Ilen Project.

“It is also a programme which travels outward beyond this island, to develop new relationships with similar North Atlantic communities, communities who share comparable island culture, challenges and maritime climate.”

Students from Nenagh Community Training Centre are also involved with the project.

These cots, based on the traditional wooden boat unique to Limerick city, will travel aboard the Ilen as she makes her journey from Limerick to Greenland this summer, following the wake of Limerick’s wild salmon.

This summer, Deirdre will sail with fellow artist Chelsea Canavan from Nuik to Disko Bay, on the western coast of Greenland, onboard the Ilen.

“Just this week, we got a letter from the kids in Greenland and a photograph, which was just extremely exciting,” she said.

“We live in an age of social media, so it's not a shock to see someone on the other side of the world but I think through baby steps, like the initial taking of the photograph, looking at the river, looking at the history of the salmon in Limerick, leaving the Shannon and making its way to a small river in Greenland, all those little baby steps have come together to see this broader kind of engagement.”

“I think that is probably the most exciting thing, that keeps us connected through the schools, through the programme, through the culture in a way that something like Snapchat doesn’t do.”

“The schools take ownership of the project, which I think is very important.”

“The participation and collaboration manifests in a simple gesture, like one student from Greenland writing to one student from Limerick. Something that would never happen without this other broader spectrum.”

“It's been brilliant,” she added.

On Thursday May 2, Watch House Cross Community Library, who share an active and creative joint collaboration with the Salmon’s Wake programme, will host the crew of Salmon’s Wake.

At the cultural event, the crew will give an update on the project’s progress. The event is free and will open at the library in Moyross between 6.30pm and 8pm.

On Friday, May 3, the painting of the Ilen sail will take place at St Mary’s Cathedral between 11am and 4pm.