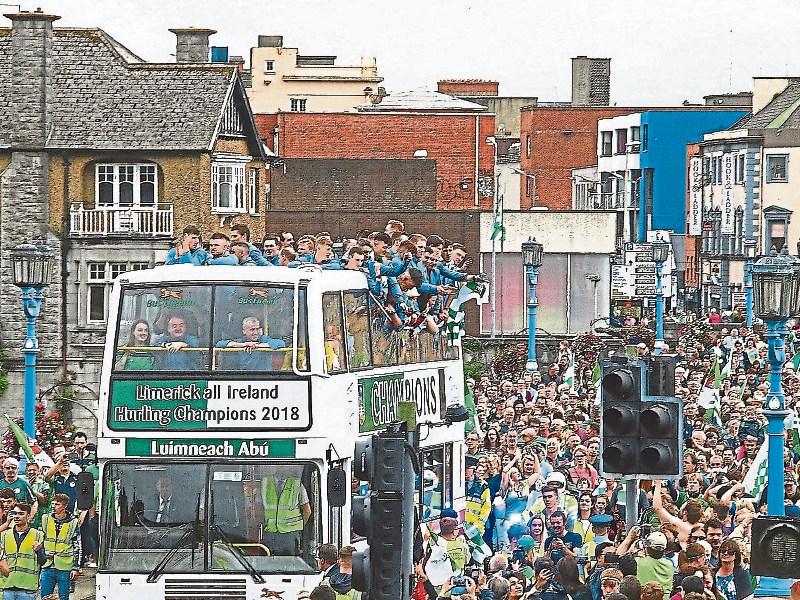 Limerick City and County Council decided the theme of this year’s parade – which is expected to draw tens of thousands to the city – will be ‘One Giant Leap’ in recognition of the fact that it is 50 years since Neil Armstrong’s moon landing.

But since the theme was unveiled, there have been growing calls to have our All-Ireland winning hurlers involved, in celebration of the unforgettable year they have brought to the Treaty county.

Cllr Butler said: “If they went with the Liam MacCarthy down O'Connell Street for St Patrick's Day, it would be such an iconic moment for Limerick. We would have given them a huge welcome if they had came down O’Connell Street holding the cup aloft after such a long wait. It would be a great opportunity to once again relive one of those special moments.”

Indeed, the day after Limerick ended a 45-year famine with Croke Park victory over Galway last August, almost 100,000 people welcomed them home, as they travelled on an open-topped bus through ​the city and out to the Gaelic Grounds.

“​It was a magical day, a hugely emotional day for me. I remember the last time when I was there, when we lost to Offally, I was there with my late father, and I remember on the full-time whistle, my thoughts went to him. I think a lot of people had very similar experiences. A huge amount of emotion was attached to this victory beyond winning,” he said.

Cllr Butler said inviting the hurlers – who are without a match this weekend – to lead the parade would have been a fitting way to thank them for all their generosity over the last few months.​

“We have it this year for the first time in a long time, we really want to make the most of it,” the metropolitan mayor said. “Hopefully we will have it again next year though.

“But it is a huge opportunity, for our national holiday, and celebrating us being champions of our national sport,” he added.

A council spokesperson said the parade is a civic event, with the only invite issued to a Grand Marshal to fit in with the agreed theme.

This year, it is Dr Norah Patten, who is bidding to be the first Irish person in space​

“The only curated aspect is the creative content and all other participants including all GAA clubs as well as all other sporting clubs, community and voluntary groups, schools and companies are asked to respond to the theme in a creative and entertaining way,” they added.