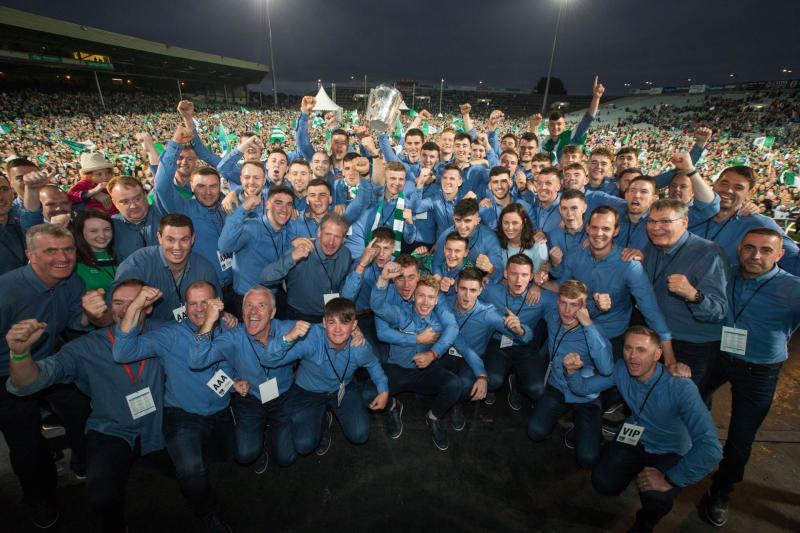 Nick Rabbitts at the Gaelic Grounds

LIMERICK’s senior hurlers have received a homecoming worthy of their status as All-Ireland Champions.

Despite less than perfect weather, more than 45,000 people packed into the stands and turf of the the Gaelic Grounds for a special free party, hosted by GAA commentator Marty Morrissey.

This came after tens of thousands of people welcomed the victorious team home to Colbert station. It’s estimated 120,000 people in total were in Limerick for the festivities today.

Midfielder Cian Lynch told an ecstatic crowd: “To go out yesterday morning, and come under the tunnel, i’ve never experienced anything like [the sound of Limerick fans]. There was an old shake there, I had a feeling in my chest, and I said ‘you know what, embrace it. Seize the day’ Words can’t describe what this means”.

He added the togetherness of the team is “huge”.

“I know I can call any one of these lads whenever I am feeling a bit down or feeling great,” he said, “These boys are our brothers.”

He pledged: “This is where we wanted to be. We have been competing at the highest level – we are at the top, and we are here to stay”.

Man of the match Kyle Hayes, 20, said his outstanding memory from yesterday at GAA headquarters was being able to carry his niece on his shoulders after Limerick’s win.

“It was a very special moment for me,” he said, “Once you’re out there, you want to do your club, your family, your whole county proud. You take it in your stride and go at it.”

He played down his personal award, saying: “The main thing is we got the win, anything else was a plus.”

Among the crowd were the team’s sponsor, JP McManus – with John Kiely, his management team and the players all paying a warm tribute to the Martinstown businessman.

Speaking to the Limerick Leader before the homecoming got under way, he said: “I was pleased to see such a hard working group get the rewards they deserve. The beauty of this is that you share it with so many people. It makes it very special.”

Mayor James Collins – who wore the traditional red robe and chain of office – was present at the event, symbolically being handed the Liam MacCarthy cup from captain Declan Hannon on behalf of the people of Limerick.

“We are very proud of our Limerick hurling team, the way they represent us. They are our new sporting heroes. There is a can-do attitude about John Kiely, and that’s why Liam MacCarthy is here with us today,” he said.

As it came to a close, the Champions and their manager John Kiely led the crowd in a rendition of several songs including Caledonia, as well as Limerick, you’re a lady, following on from an earlier performance by the song’s writer Denis Allen.

For more pictures and words from the homecoming, see The Leader, out Wednesday, and the weekend edition of the Limerick Leader