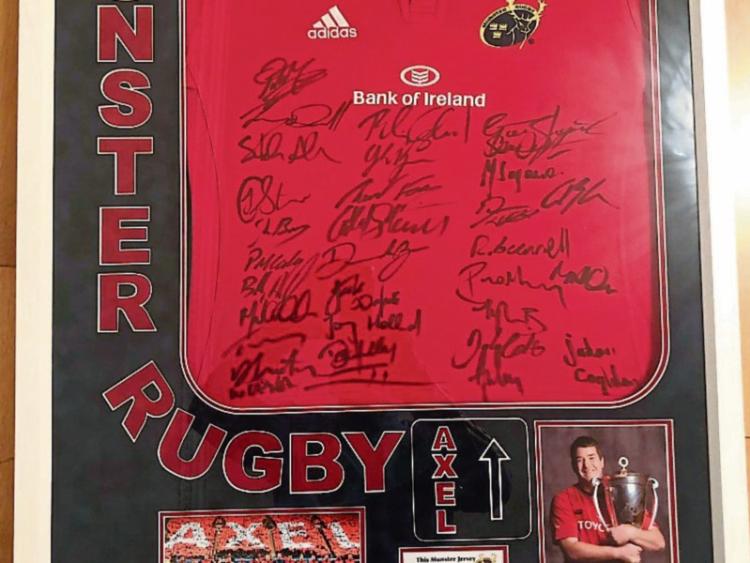 A MUNSTER jersey, signed by the late Anthony Foley and the Munster team is generating a lot of excitement and anticipation in West Limerick and further afield.

The jersey has been put up for auction by the Abha Bhán Parish Park committee in Loughill- Ballyhahill and started off with a €100 bid. But now there is a solid bid of €1,500 on the table for the jersey which was signed in Thomond Park in April 2016, just six months before Anthony’s death.

It has all come as a bit of a pleasant surprise for the hard-working committee who, over the past three years, have transformed their dream into reality and transformed a field at the centre of Loughill into a park for all ages and abilities.

But he revealed: “It was only when we got the jersey framed we realised that Axel had signed the jersey too.”

Anthony was head coach in Munster at the time, Declan pointed out, and brought the jersey into Thomond Park to be signed.

At that time, the Abha Bhán Parish Park project was just starting out on its ambitious journey, a journey that is now nearing its end. The park is expected to open shortly, providing a public space for locals and an attractive stopping off place for passing visitors. The park, located on the banks of the Abha Bhán river, includes a playground, a sensory garden, an all-weather pitch and a walking/running circuit and has been fully landscaped and provided with benches.

The project has cost about €500,000, Declan explained, €360,000 of which came from a Sports Capital grant, the JP McManus Foundation and Limerick City and County Council.

The Axel jersey will help ensure the project will begin life debt free.

The jersey has been professionally framed and is accompanied by a letter of authenticity from Munster Rugby.

Bids will be accepted until the end of March, by email on abhabhanpp@gmail.com or leave a private message on the Facebook page, Abha Bhán Parish Park.