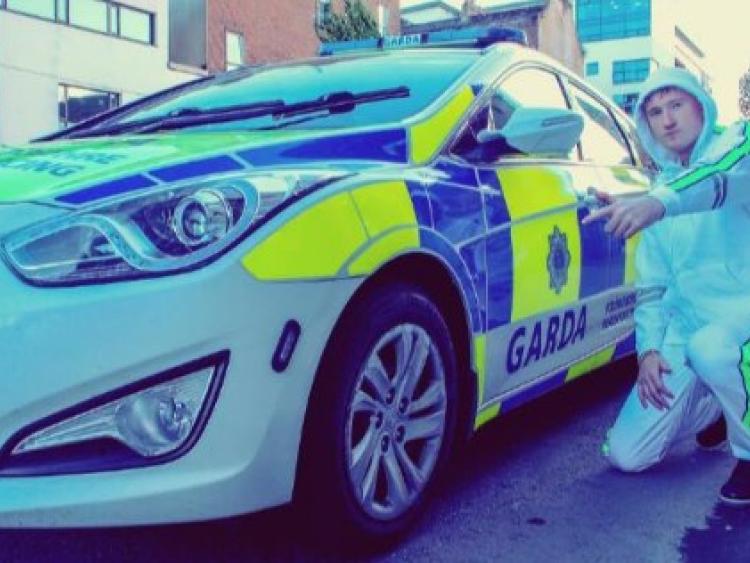 Mason Roche, aka MXSE, dons his own designed tracksuit next to a garda car on Henry Street

A UNIVERSITY of Limerick student is causing a stir on social media with his latest style choice—the garda tracksuit.

Mason Roche who studies architecture when he isn’t on stage or designing outfits, came up with the idea when he decided he wanted to stand out while performing.

“The idea was to create something striking and satirical. My inspiration for it all was the Rubberbandits. I wanted to combine two things you shouldn’t see together. Guards and the lads in the tracksuits they are chasing,” Mason said jokingly.

The rapper, who performs under the stage name MXSE says he plans to sell the tracksuit after it has blown up across social media.

The reaction has been massive. Everyone loves it. Someone got in contact with me last night and they want to partner up with me,” said Mason.

The outfit is designed to resemble a garda car, rather than the garda uniform.

“It’s white with a luminous green stripe. It had to be green, I wouldn’t settle for anything else. It also doesn't have the official Gardai badge, so I think I am safe from being sued,” Mason, who is originally from Doolin, County Clare, added.

Mason released the outfit to coincide with his upcoming album launch. The album, titled Throwing Shade will be released on March 16, just before St Patrick's day.

The Leader understands Mason's project is not in association with An Garda Siochana.