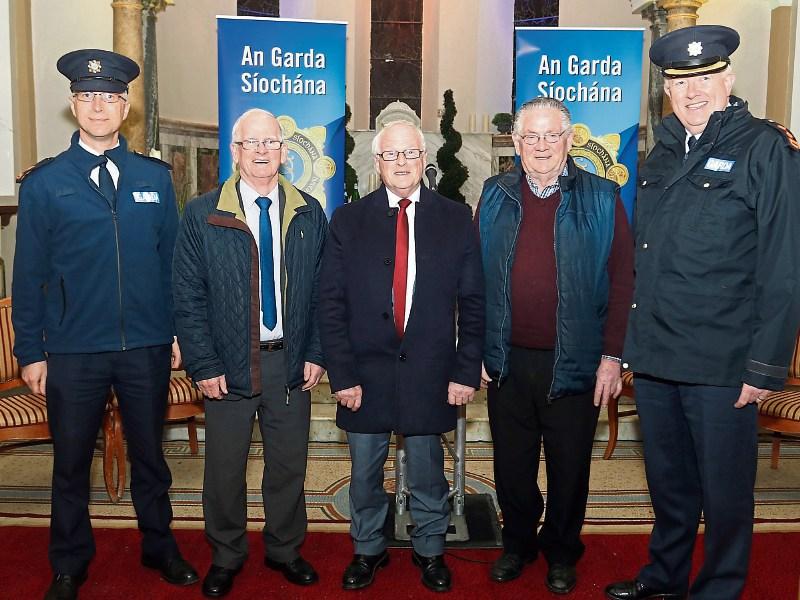 BRUFF gardai tackled crime, along with rural isolation and mental health in a groundbreaking public meeting on Tuesday evening.

Up to 150 attended the first multidisciplinary event of its kind organised by gardai in County Limerick. Senior officers, Chief Superintendent Gerard Roche, Bruff Superintendent Brian Sugrue, Detective Sergeant Ted Riordan and a number of gardai were on hand to meet locals in the Old Convent in Bruff.

Chief Supt Gerry Roche opened proceedings, saying he is from a rural area of County Galway and will do everything he can to support the rural communities of County Limerick.

“Our job is to make County Limerick as safe as possible to live in and have crimes investigated. We did a survey last year and what people want is more visibility, more cars and more uniforms. We are revamping our community policing model. Every garda will have an area and everybody will know their local garda. It’s not for 999 calls, it is to have that link. The big thing is to speak to people in trouble from an isolation point of view. We have direct links to the services,” said Chief Supt Roche.

Seamus Sherlock told the crowd about how he returned home one day in 2012 to find a letter from the sheriff saying he had been evicted from his house. For 350 days he set up a barricade.

“We wanted to pay our way. We wanted to restructure the bank loan. After 350 days I got a phone call from the bank that lasted 15 seconds. They said they will go with my plan and restructure it,” said Mr Sherlock, who now has paid for the farm. Since then he has helped countless people in similar situations. However, one story shocked attendees. Mr Sherlock said a young man died by suicide after a bank said they were taking back his tractor.

“He thought everybody was going to be talking about it and laughing at him. He said he wouldn’t be able to go to the pub or go see a match. It was all over a 100 horsepower tractor,” said Mr Sherlock, who urged people to seek help, not to be judgemental on their neighbours and not to be so “hard on yourselves”. He praised the gardai for holding the meeting and the new community policing plan.

Sergeant Ber Leetch said one in six burglars walk in to a home through an open window or door. She said the greatest deterrent to burglars is a sign of occupancy. Her advice is to cut hedges so there is an open view of your house, a yappy dog, sensor lighting and locked doors and windows.

She has a simple warning when it comes to scams – if it is too good to be through then it is.

Patrick Fitzgerald and Garda Shane Thornton gave a joint talk on mental health. They listed five ways to improve your wellbeing – connecting with people, being active, taking notice of your surroundings, keep learning and being nice to others.

Supt Brian Sugrue thanked all the speakers, attendees and summed it up by saying it’s about looking our for yourself, your neighbours, your community and your mental health.