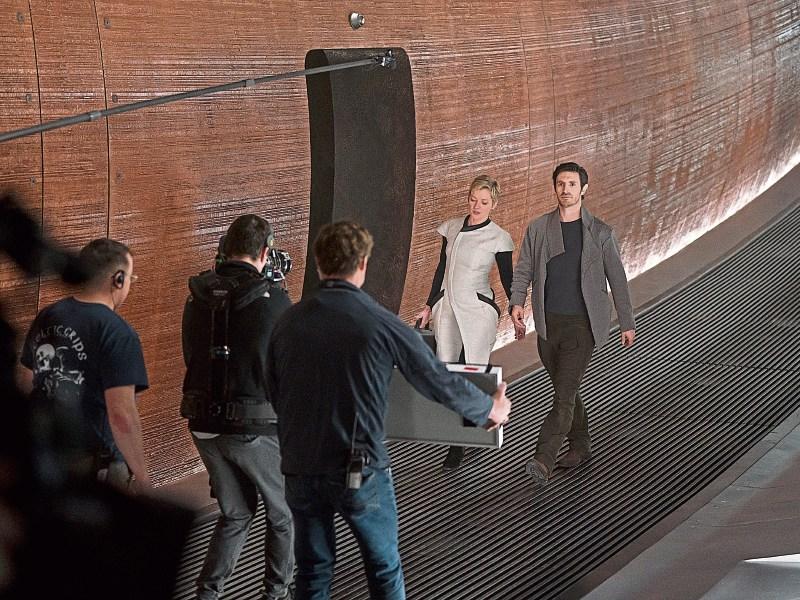 Behind the scenes with lead actors Gretchen Mol and Eoin Macken on the set of Nightflyers at Troy Studios Picture: Netflix

THE PRODUCER of the Netflix sci-fi horror series Nightflyers that was filmed in Limerick has said he is “hopeful” that the show will see a second season at Troy Studios.

Nightflyers, an adaptation of a George RR Martin novella, will air on Netflix next Friday, February 1, following its release on the Syfy channel in the US.

The new show, which features a considerable number of Irish cast and crew, is said to have generated around €50m for the local economy.

In a special press briefing, Nightflyers producer Sean Ryerson said he believed that Limerick will become a hub for the film industry, particularly in relation to a strong workforce.

Asked if he was confident of a second season appearing, Mr Ryerson said: “Oh, I am hopeful. What are ya gonna do? You can’t say, but I think it will.”

And while he could not confirm the cost of the project, he said: “Suffice it to say, it’s huge, and it’s a very, very big budget. By far, the biggest show Syfy has ever contemplated.”

When the Limerick Leader asked if production companies would now be vying for space at Troy Studios, he replied: “I hope not because we want to keep them, the studios, for us. I hope what it means is that somebody builds another studio here because there is interest and now there is a crew base, and now people will want to keep it going.

“That would be ideal because I am still here and I have got a choice of a bigger crew. It’s how this whole thing works. Every place in the world is the same. Was there a crew base in New Mexico? There is now. Was there a crew base in Baton Rouge, Louisiana? Nope. There is now. Atlanta—there is a huge crew base. You definitely can’t make a show in Calgary, but now Emmy award-winning shows, like Fargo, are made in Calgary. How is that possible? It’s impossible until it happens.”

Mike Cantwell, of Innovate Limerick, one of the driving forces behind Troy Studios, said they are hopeful that either Nightflyers or another big production company will come to Limerick.

“We have already conversations with a number of production companies, who are interested in coming to the region now, because we have shown that we have the capability to do it within the region,” he said.