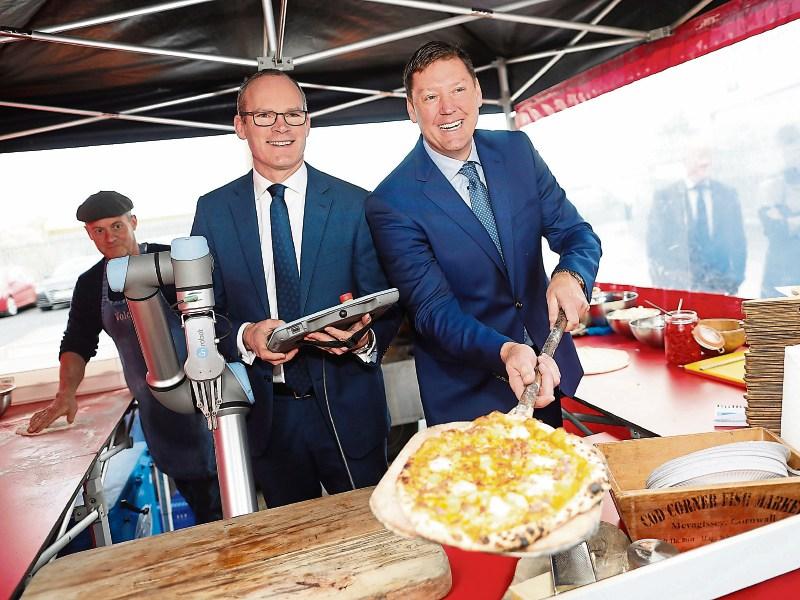 TÁNAISTE Simon Coveney enjoyed ham and pineapple pizza cut into slices by a robot after he officially opened a new state-of-the-art facility in Limerick.

The Tánaiste also showed a steady hand as he controlled a state of the art UR Collaborative Robot, or ‘cobot’, to cut the ribbon opening technical distributor Reliance’s new facility on the Ballysimon Road.

The official opening of the new base also marks Reliance’s new partnership with Universal Robots, a manufacturer of collaborative robots.

“It is our goal to be the leader to identify, learn about, and introduce these latest technologies as they evolve to continually help our customers to compete and grow,” Reliance managing director Peter Creighton said.

More than 120 people attended the opening of the new facility, including rugby hero David Wallace and Limerick hurlers Barry Murphy and Oisin O’Reilly.

Six cobots manufactured by Universal Robots were also showcased at the official opening, which was celebrated with a team of the robots performing a routine with lightsabers to the Black Eyed Peas song Let’s get it Started.

According to the company, cobots assist businesses to carry out repetitive tasks, and free up employees for more rewarding roles due to their special collaborative process.

“Reliance has set the standard for what everyone wants to reach and surpass,” Tánaiste Simon Coveney said.

“Because of Brexit the Irish economy will look towards automation companies such as Reliance for guidance,” he added.

Reliance is currently working with companies of all sizes throughout Ireland to “streamline repetitive industrial processes, reduce cost and improve reliability.”

The company, which has been in business for 95 years, opened its first branch in Dublin.

Reliance had its Limerick branch on Broad Street since 1967 until it’s relocation to the Ballysimon Road last October.