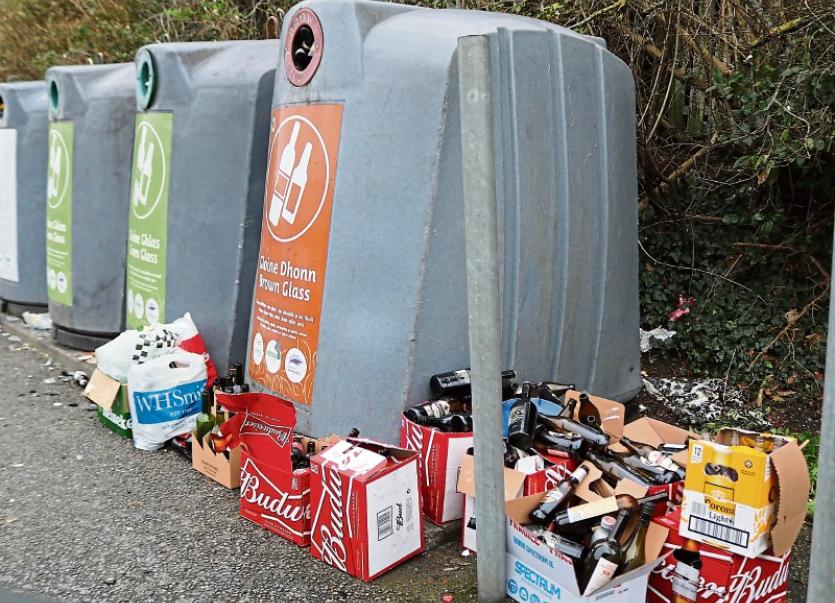 The recycle bank at Roxboro Shopping Centre came in for criticism in the Ibal survey Picture: Michael Cowhey

LIMERICK City Tidy Towns is to set up a fast-response ‘swat’ team to deal with problem litter spots.

It comes after the southside of the city was severely marked down in the latest Irish Business Against Litter (Ibal) anti-litter league.

In particular, An Taisce’s inspectors appointed by Ibal took issue with recycling facilities at Roxboro and the Crescent Shopping Centre.

At the latter, they claimed: “Bags of items had been abandoned directly in front of the recycle units, piles of litter had been discarded to the rear, bags were stuffed between the units and cardboard boxes were strewn in the shrubbery.”

Helen O’Donnell, Tidy Towns, said as part of the group’s new initiative, the “swat team” will work with the local authority to eliminate the problems.

“We have a very large network of people, and when there is an area where we have identified problems, we will work to try and eliminate these problems. We are all volunteers,  but working with the local authority, we feel we would be able to help where there are problem areas. We all want Limerick to be clean and successful,” Ms O’Donnell said.

In the latest Ibal survey, City South was ranked 34th out of 40 areas surveyed, and was deemed to be ‘moderately littered’.

The inspectors were also critical of an piece of land beside the CIE Sports and Social Club, saying: “The area wasn’t just casually littered, but had been subject to dumping of domestic waste, e.g. nappies were strewn about. It has clearly suffered long-term abuse and neglect. This area needs immediate attention.”

There was some good news for the southern areas, however, with Rosbrien Road, Hyde Rangers, Ballinacurra Gaels, and Kilteragh all receiving the top grade A status.

Jerry O’Connell, of the South City Residents Association – which serves the O’Connell Avenue area – feels his group has unwittingly become tied-up in Ibal’s poor showing, even though their area is not covered.​

While they cover the southern areas of the city centre, the report referred to the southside areas outside the central areas.

Mr O’Connell said: “We are out practically every day of the week. You can’t paint everybody with the same brush. I got so many phone calls about this.​ They are not giving credit to the volunteers. We are not looking for slaps on the back, but there are people out there constantly cleaning up.”

In the city centre itself, there was more positive news, with the inspectors hailing a “great improvement” from the time they first came here, almost 20 years ago.

Only three central streets dropped below grade B: Robert Street, Windmill Street and Ellen Street, where the inspectors noted: “Heavy levels of a wide variety of litter trapped behind a fence on top of a low wall. Chewing gum was widespread throughout the paving, quite a blight on the overall impression created along this street. There was also a series of boarded up properties along Ellen Street.”

The city stands 17th and is ranked ‘Clean to European Norms’.

Fermoy in Cork is ranked cleanest in the survey.

Limerick City and County Council commended its staff and the various voluntary and business groups “who have helped to keep Limerick clean over the past six months”.

It said the city’s status as Clean to European Norms “reflects the work that is being carried out by Limerick City and County Council and various volunteer and business groups, which clean up these areas”.

It acknowledged that report for Limerick City South was “less encouraging” and would “no doubt focus the attention for those helping to keep Limerick clean”.

“Overall it is important to highlight the number of areas surveyed across Limerick which received a Grade A standard. It is however disappointing to note that dumping and littering in some areas highlighted is continuing,” said a spokesperson.

“Limerick City and County Council is working with its own teams and with members of the various communities to help keep their localities litter free, but there is also an onus of individuals, groups and businesses to make sure their litter is disposed of in a proper manner.

“It is unacceptable to illegally dump your rubbish on the side of a road or leave containers and other litter strewn around recycling facilities.

“Limerick City and County Council is appealing to all people to help keep Limerick litter free by disposing of their litter and rubbish in a proper manner.

“It is incumbent on everyone to help keep Limerick tidy and litter free. We all need to do our bit,” they added.