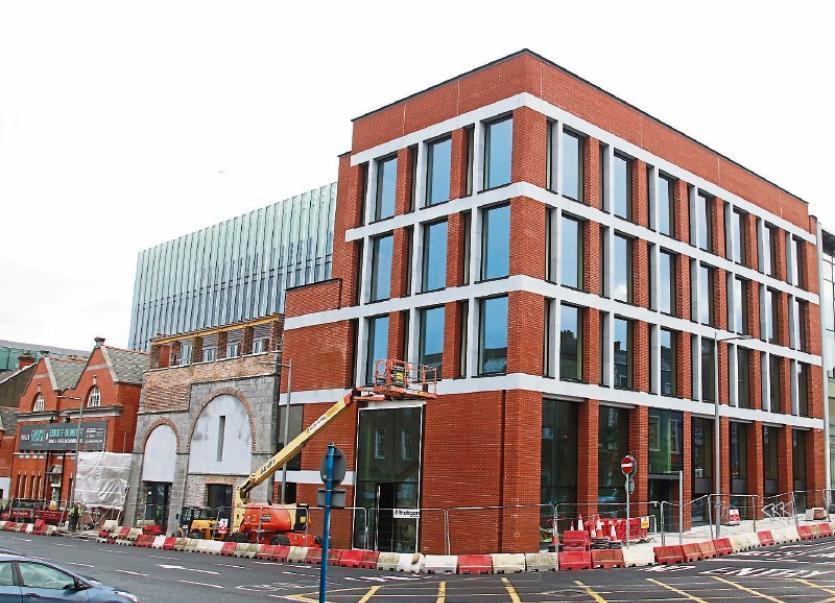 The firm is are interviewing potential tenants for office space at Gardens International Picture: Adrian Butler

The €18m euro facility on Henry Street is due to open in the next couple of weeks, according to Mayor of the City and County of Limerick Cllr James Collins.

Aircraft lessor Nordic Aviation Capital is to take up more than half - 51% - of the multi-level complex, which will be “on a par” with the very best office space across the world, according to the developers.

“There is a lot of interest in the remaining floors. What Limerick Twenty Thirty is doing is assessing applications that have been made. They are currently reviewing the potential tenants that are interested,” said Mayor  Collins.

“Limerick Twenty Thirty, like any organisation, will do their due diligence before a decision is made,” he added.

The official opening of the building is expected to take place before the end of January, with Limerick Twenty Thirty, a special purpose vehicle created by Limerick City and County Council to develop key sites acquired by the local authority, completing the final touches and “bringing the building to a certain stage”.

“Nordic Aviation Capital are in the middle of fitting out the floor they are leasing. I think that will be ongoing until around March,” Cllr Collins explained.

The Mayor outlined what the opening of the building will mean for Limerick.

“It is fantastic to see it opening. It has stood idle as a concrete shell for a long time. Limerick Twenty Thirty took it over and turned it around very quickly. So now we have a lead goal complete, building a highly energy-efficient office block in Limerick city centre,” said Mayor Collins.

Video taken before Christmas giving a look inside Gardens International. It's a busy time here at Limerick Twenty Thirty! pic.twitter.com/Pw9UVcLG8e

Mayor Collins is hoping that this development will be a catalyst for private developers to re-enter the market and develop other office spaces, which he says is hugely needed in Limerick’s city centre.

“That’s the role of Limerick Twenty Thirty, we’re just there to kickstart the market again. We’re not there to build the whole city,” he added.

The Gardens International is one of a number of exciting projects being carried out by Limerick Twenty Thirty.

“It is the first of our projects. We have the Gardens almost complete. We have Project Opera going in for planning. Its been a pretty busy time for us here at Limerick Twenty Thirty,” Mayor Collins said.

“It is a great start to 2019. One of the main barriers to providing employment in the city centre was the lack of suitable office space.

“That's why Limerick Twenty Thirty intervened in the market and we have provided fantastic office space in the city centre. Interest in leasing the building from us is very high, which is brilliant news,” he added.