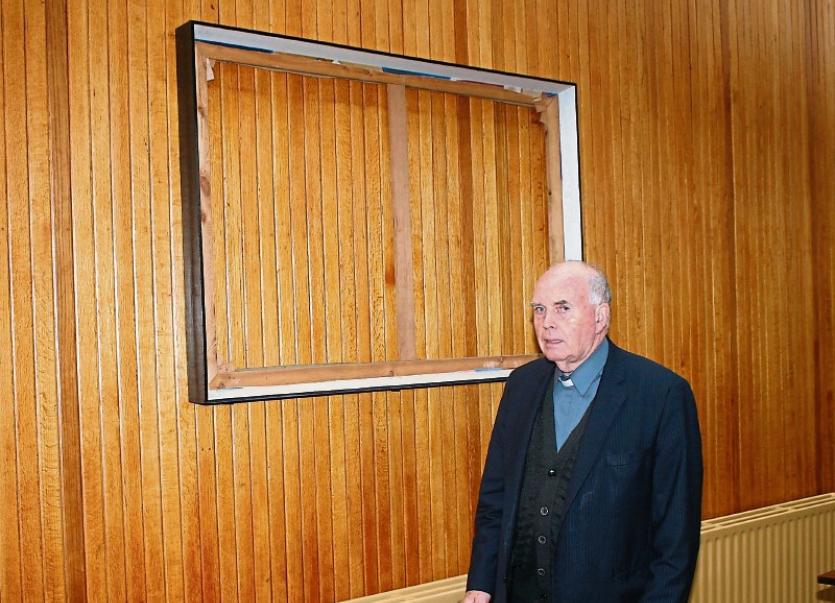 PAINTINGS worth €25,000, stolen during a brazen Limerick city church robbery, have been recovered “literally crumbling” after spending five years, dumped outside “exposed to the elements.”

The future of five much-loved paintings, stripped from their frames with a stanley knife at Our Lady of the Holy Rosary church in 2013, is currently in the hands of art experts, after they were returned to the parish in a “poor state.”

In October 2013, an unidentified thief entered the empty church on the Ennis Road with a newspaper covering his face before making off with artworks by renowned artist, the late Fr Jack Hanlon.

“The theft caused devastation to the parish at the time and to my predecessors,” Parish Priest Fr Desmond McAuliffe said.

“But there wasn’t anymore information until the gardaí called me to say they had been recovered in pretty poor state, which in fact they are.”

“They were very well put together by the guards when they were recovered but they are in a very tattered condition,” he added.

“They have been left out in the elements. They were literally crumbling when the guards brought them back. I’m not very optimistic at the moment.”

The late Fr Hanlon created the artworks specifically for the church when it opened in  the fifties, Fr McAuliffe added.

“He was a very famous artist in his own right but he also did a lot of church commissions.”

“They would have been a unique set of religious paintings of the saints, unique to the church.”

“The church at the time would have given a number of commissions to some of the most celebrated artists and sculptors.”

They have now been sent for evaluation by experts in Dublin, Fr McAuliffe added.

“To see if there is any possibility they can be pieced together again. I think it's for the feasibility of a repair more than anything else.”

“One of the bishops took slides of the paintings so we were able to reproduce them.”

“What we have in the church at the moment are reproductions,” Fr McAuliffe explained.

“We’re just waiting for confirmation from the experts but they may not ever hang in the church again because we may not be able to.”

“We might be able to add them to the archive,” he added.

The five paintings, measuring roughly three feet long by five feet wide, were last valued at €5,000 each when their value were assessed in 2010.

However, recent sales of work by Fr Hanlon have fetched up to €8,000.

In the fifties, art collector John Hunt introduced Fr Hanlon to Monsignor Michael Moloney, a parish priest who later became Diocesan secretary to successive bishops of Limerick, who had a great interest in the arts.

Hunt encouraged a number of artists at the time to contribute to the decoration of the church, and also loaned items from his own collection to the church for its opening.

The work of Fr Hanlon has also been featured in the Irish Museum of Modern Art (IMMA) in Dublin.