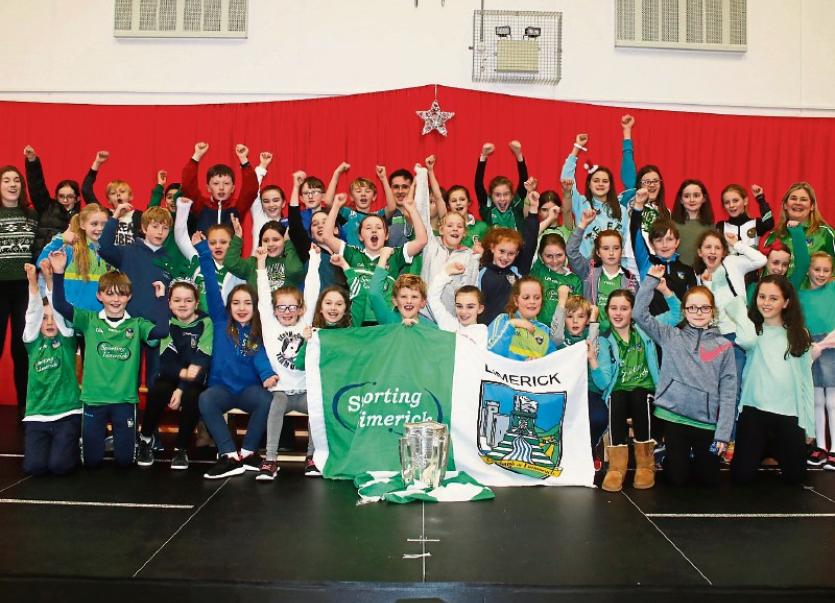 CHRISTMAS came early for the pupils of Gaelscoil an Ráithín in the form of All-Ireland winner Darragh O’Donovan and the Liam MacCarthy trophy.

Accompanied by his cousin Emma, who is in junior infants, Limerick midfielder Darragh and County Board member Noel Hartigan marched up to the stage through the green sea of excited youngsters.

Stepping into the podium the Doon dynamo humbly addressed: “Thank you all for having us with the Liam MacCarthy Cup, I’m very sorry, but I don't have much Irish at all, I wasn’t great at it in school.

“Santa Claus is coming in two weeks; if you’re all very nice I hope the new Limerick jersey is top of the list,” Darragh assumed, to which the páistí responded in unison with a loud “Yes”.

Darragh implored the Gaelscoil pupils to keep developing their skills on and off the field and informed them that the path to success will mean sacrifices of one’s leisure.

“Hopefully someday, some of you will be up here where I’m standing with the Liam MacCarthy trophy or the All-Ireland camogie championship for the girls.

“Just keep practising away, keep listening to your teachers and coaches and when you get home in the evenings have a puck, or a kick of the ball, don’t be sitting inside watching the television or playing Playstation,” he urged.

The pupils were given a prime opportunity to do just that on that very evening when the dynamic Doon midfielder made this announcement: “Once again, thanks a million for having us out this morning and keep practising away.

“I also heard that there will be no homework this evening!” the hurler proclaimed which blew the roof off the school.

Another person with All-Ireland winning blood was Patricia Counihan, the Gaelscoil’s dance teacher whose father Michael McCarthy was in the squad for a Mick Mackey-inspired All-Ireland win against Kilkenny.

“My father was on the 1940 team, and I’ll be damned if I don’t get a picture with the trophy!” Ms Counihan chuckled.

After a lovely rendition of ‘Last Christmas’, sung by the students, a young bard named Aisling passionately read out a poem dedicated to her granddad Frankie Coughlan titled Granddad’s All-Ireland, here are the final lines:

“Up the pitch down the pitch he can’t keep up with the pace, will it happen this year? Or will Limerick fall from grace?

“Point after point it seems to never end, then finally the whistle a roar it sends!

“As I watched my grandad, with tears in his eyes, he knows he will hold the Liam before he dies,” she concluded before receiving a standing ovation.

Like the county hurlers, it’s been a busy couple of years for Gaelscoil an Ráithín who moved to their new state-of-the-art premises in Mungret after leaving the grounds of Garryowen Football Club in 2017.

Ms Imelda Uí Shomacháin, the deputy principal of the primary school, was delighted for the long-awaited visit of Liam MacCarthy.

The deputy principal showed no signs of weariness despite organising the visit as well as having two Christmas pageants on the same day.

“It was great timing we had our Christmas shows this morning and this evening it’s just lovely, it really has been a fun day for everyone.”

“There’s been huge celebration and excitement from our pupils from beginning to end for the arrival of the cup and the player today for a really special celebration,” Ms Uí Shomacháin acknowledged.

See page 14 of the city edition for more pictures