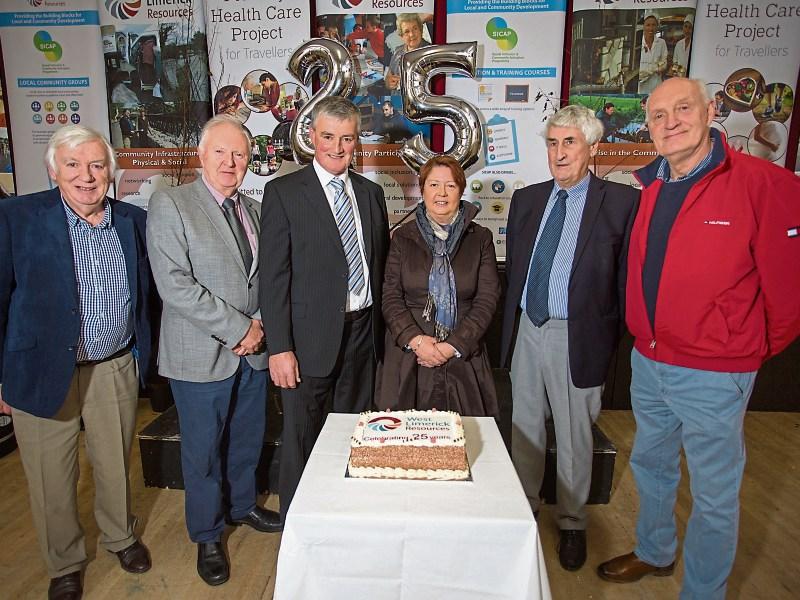 A SIGNIFICANT milestone has been passed in the ongoing story of community development in West Limerick as West Limerick Resources marks its official 25th anniversary.

But as founding chairman, Sean Liston pointed out at an event in Knockaderry to celebrate the silver anniversary, the work began earlier, in November 1991, when a group of people first came together to “look at a new style of company” which would address local development.

That new style of company, a partnership or LEADER company, had already clocked up success in East Limerick with Ballyhoura Failte and the feeling was that West Limerick needed to organise to be in with a chance to win itself some EU funding in the next round of LEADER funds.

Recalling those early days, Mr Liston spoke of securing small grants to draw up plans and of the positive attitude that was abroad to create a better place to live and a higher quality of life for the communities of West Limerick. But he spoke too of the legacy of self-help that they had inherited from the Muintir na Tire movement, the co-operative movement and the campaign for Carnegie Libraries.

“We made mistakes. We didn’t get everything right the first time,” he said. But they got help from a wide list of individuals and organisations and Mr Liston paid tribute to them and thanked them for the invaluable role they had  played. In naming the company West Limerick Resources, he explained, the word resources was key and referred to the vital resource of the people in the communities.

And he recalled the first grants approved by West Limerick in 1995.”That was a big milestone. When the first grant had gone through we had arrived.” But he concluded: “We cannot stand still. We must embrace all of the opportunities that arise.” The communities we live in now are different from 25 years ago and the challenges are also different, Mr Liston said. But, he reminded people of the great catch-cry: Is féidir linn.

West Limerick Resources offered light, hope and inspiration through the difficult years of the economic down-turn, Cllr Adam Teskey, chairman of the Adare Rathkeale Municipal District said. “I believe we can achieve more by working together,” he continued.

“It is an absolutely wonderful occasion,” Cllr Jerome Scanlan, chairman of the Local Community Development Committee said. “West Limerick Resources has done a wonderful job. The most challenging bit are the 25 years ahead of us.”

Shay Riordan, manager of West Limerick Resources, thanked all those who had served the company either as a volunteer or an employee over the 25 years.

To mark the silver anniversary, 40 communities in the company’s catchment area will receive a silver birch for planting. “Trees are a symbol of life and growth,” Suzanne Rowley said. “We look forward to supporting and nourishing that growth over the next 25 years.”

“Nobody can put into words what West Limerick has gained as a result of West Limerick Resources,” he said. “The work they have done has helped to keep our community one of the most vibrant in the country.”