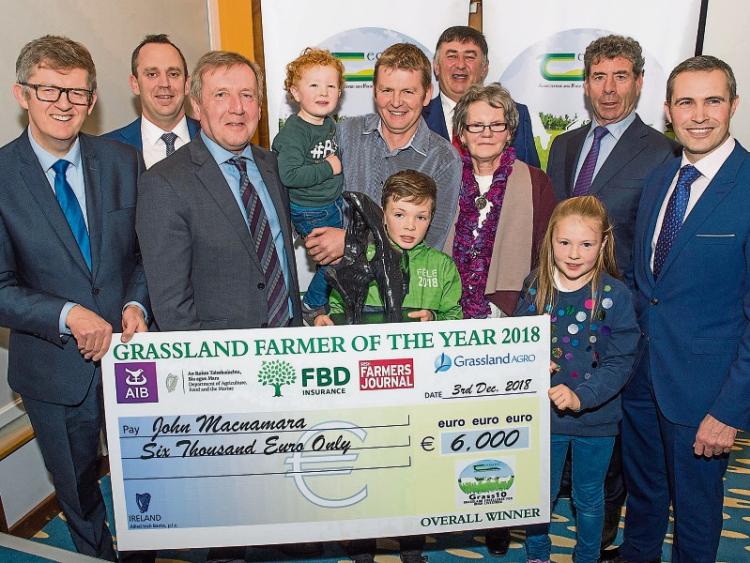 John Macnamara, Knockainey, with his mother Mary and children Conor, Padraic and Ailbhe and sponsors

JOHN Macnamara was named the overall winner of the Grassland Farmer of the Year award but when the Leader rang he was more concerned about highlighting the other Limerick winners.

Niall Moloney, Crecora, is Young Grassland Farmer of the Year, while John Leahy, Athea, received a merit award for most improved grassland.

Now in its second year, the awards recognise and reward farmers who are achieving high levels of grass utilisation in a sustainable manner.

The Department of Agriculture sponsored the overall prize fund of €30,000.

John, from Knockainey, also claimed the dairy enterprise award. The son of Mary and the late Paddy, husband to Olivia and dad to Caoimhe, 13, Padraic, 12, Ailbhe, 9, and Conor, 2, said it was a very prestigious award.

At the ceremony on Monday, John said there is immense pride in bringing the All-Ireland title back to the rural parish of Knockainey.

“My late father instilled in me the pride in doing things right. Over the years we managed to get the grass right,” said John, who is passing on the same love of farming to his children.

During the judges’ visit in August, Padraic started reading out a text from Kerry Agribusinees on their milk protein and cell counts. It was a big hit with the judges.

John’s motto is to see problems as challenges because a challenge is something you can overcome.

“In 1996, when I took over the farm we started the Kerry monitor programme with Tom Shanahan. Tom told us that reseeding was the way to go. In a time when there was very little reseeding being done we started reseeding in 1997/1998. Those fields have been reseeded a couple of times since but that started us out,” said John.

Whatever job you are in, he says knowledge is key.

“Over the last 20 years we have put a lot of work in to grass. What started off with Tom Shanahan continued with putting in paddocks, fencing and water.

“In the last five to 10 years we measure the farm once a week and put in monocultures of grass.

“We have moved on paddocks that are not growing enough and put in better varieties.

“We have made huge strides on soil fertility in the last five years. We spread 300 tonnes of lime this year. You can’t grow the grass without having the soil right. Grass has a huge role to play in sustainability going forward. The more grazed grass we can get in to cows and the more time we have cows outdoors the better. It is all about knowledge,” said John.

He concluded his speech by congratulating all the nominees and winners and summing up a memorable year for Limerick.

“The colour of grass is green and the Limerick jersey is green,” said John, who is very involved in ladies football as chairperson of Knockainey Ladies Football Club and part of the U-14 county management squad with John Quane, Breda McGuinness and Bridget Meehan.

He stresses the importance of being involved in the community and not have it all farming. The squad actually travelled to Ringsend to play Dublin on the day before the awards. And this Saturday night, a banquet dinner and medal presentation for Knockainey’s county intermediate winners takes place in Bulgaden. John is one man who doesn’t let the grass grow underneath him.

The Grassland Farmer of the Year awards are part of the Teagasc Grass10 campaign which is proudly supported by Teagasc, the Department of Agriculture, Food and the Marine, AIB, FBD Insurance, Grassland Agro and the Irish Farmers Journal.