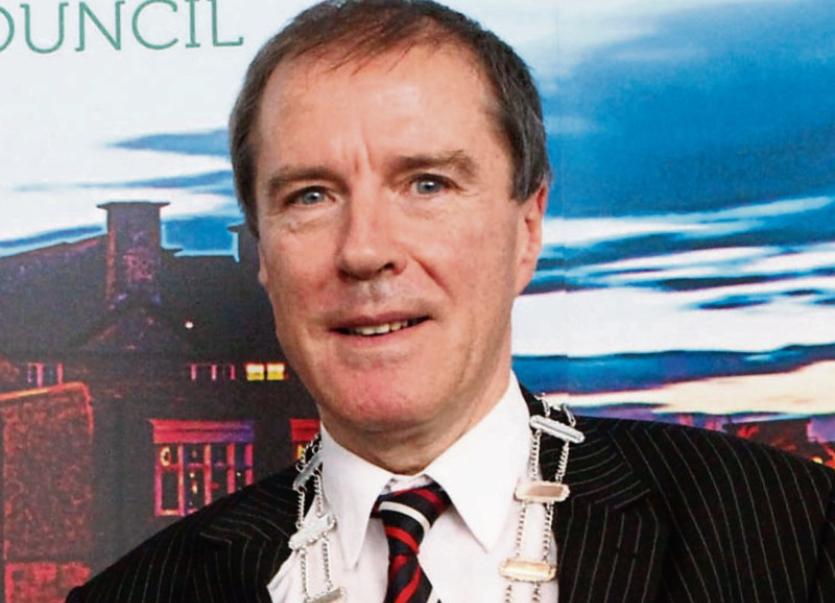 A COUNTY councillor has told Conn Murray, CEO of Limerick City and County Council, to “take heed or ignore at your peril”.

Cllr Gerald Mitchell has sought legal advice as a row over plans for a €2m roundabout rumbles on.

Councillors are not being allowed to rescind their original decision to back a four legged roundabout at O’Rourke’s Cross, Bruree in October 2017.

“We are sending a clear message back that we have our rights and we are not tolerating further bullying tactics,” said Cllr Mitchell, at the most recent Cappamore-Kilmallock municipal district meeting. Councillors want a fifth leg from the roundabout in to the petrol station.

Following the meeting in October 2017, councillors said a statement was made during the debate that they would have “legal implications” on safety grounds if they did not support a four-legged roundabout.

They invited Mr Murray to a rare special meeting of the municipal district last month. The seven councillors asked Mr Murray to use his executive power to rescind their decision.

Mr Murray declined. He said it is a matter of road safety as a fifth leg on a roundabout increases the percentage of accidents by 60%.

At last month’s meeting, Cllr Mitchell read out a motion he had submitted but wasn’t allowed on the agenda. At this month’s meeting he read it out again under any other business as he received “legal advice to the contrary”.

“I will move that the members rescind the decision made on October 2017 in relation to a proposed roundabout roundabout at O’Rourke’s Cross, Bruree, on the grounds that the members were given incomplete, inaccurate and inadequate information. The members were not advised of the relevant statutory provisions and guidelines,” said Cllr Mitchell, who explained the motion very simply.

“If I purchased a garment and on the label it stated it was waterproof and I discovered it was not I would return the garment on the basis of misinformation. That is my legal right as a consumer.

"A statement was made in October 2017 by a director of service that we had legal implications if we did not support the four arm roundabout. This heavy impact statement changed the course of the meeting. This statement was later found to be inaccurate and we also received insufficient and incomplete information in relation to the relevant provisions of TII guidelines,” said Cllr Mitchell.

Cllr Mike Donegan said Mr Murray stated that a fifth leg on a roundabout increases the percentage of accidents by 60%. However, Cllr Donegan said this refers to five roads.

In the case of O’Rourke’s Cross it will be an entrance and exit to the filling station.

Cllr Mitchell said that statistic doesn’t stand up as less traffic will be accessing the premises.

“The business owner is also offering to facilitate buses. In the current plans people have to cross the main road with 18,000 travelling daily,” said Cllr Mitchell.

He said at the special meeting with Mr Murray, he said the CEO made the statement that “we were not engineers”.

“We are not accountants either and yet we were requested to pass budgets as a reserve function. That statement from the CEO undermined the role, function and rights of all councillors and all seven councillors expressed concerns and deep dissatisfaction with the proposed roundabout in relation to road safety, proper planning and user friendliness,” said Cllr Mitchell.

The Hospital councillor said he sought legal advice from John Power, solicitor. Mr Power said: “In these circumstances , the councillors should be given an opportunity to review and reconsider their earlier decision.”

Cllr Mitchell concluded by saying: “I would ask the CEO [Conn Murray] to take heed or ignore at your peril.”

Meetings administrator, Mark Leahy said the legal advice from their solicitors - Wallace Reidy & Co - is that the motion cannot be put on the agenda. Cllr Donegan said he supported Cllr Mitchell’s motion to rescind their original decision.

“It is disappointing we have to come to this. It is about road safety. People crossing that road to get a bus is wrong,” said Cllr Donegan.

Cathaoirleach, Eddie Ryan said there was a little naivety on their part in October 2017.

“We had the option of sending it back if we so wished. We were not given that advice. We were told we would be liable if anything happened on a five leg roundabout. I am allowing the motion,” said Cllr Ryan.

It was seconded by Cllr O’Donnell and backed by all the councillors.