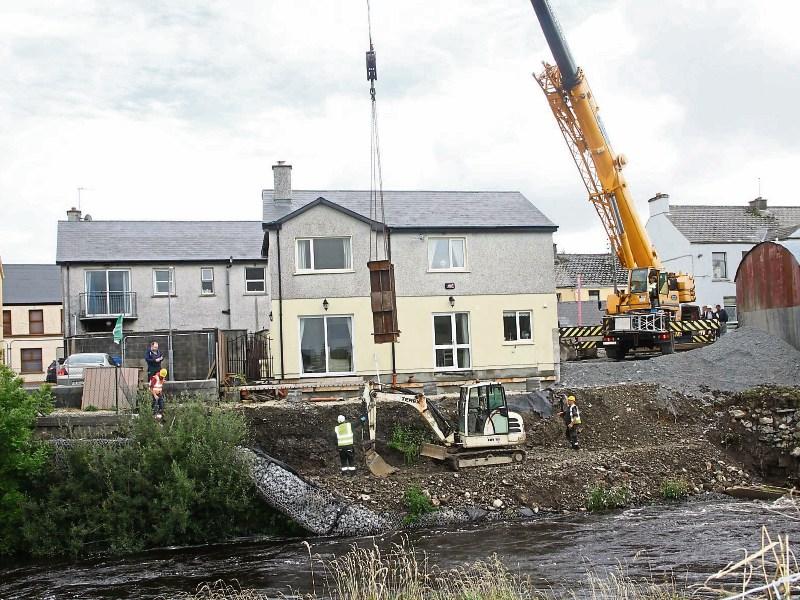 TWELVE months after their rear wall and garden terrace were washed away by the flood waters of the River Feale, Eamon and Marie Roche are finally reassured their Abbeyfeale home is now safe.

Thirty sheets of steel, each over 30 feet long, pounded into bedrock and anchored with concrete-filled steel pipes, now form a defensive wall, shielding their home on New Street from further river erosion.

“It is a belt and braces job,” Eamon explained.

The vital part of the work finished just last week and a concrete capping has yet to be put in place, before the terrace can be fully restored for use. But the relief for the Roches is enormous and they are facing into a very different Christmas than this time last year.

For them, disaster struck on Sunday, November 12, 2017, when the poured concrete and rock armour protecting the rear of their home had been carried by the river, slicing away a large section of their garden terrace and making them fear for the foundations.

Four weeks later, engineers hired by Limerick City and County Council inspected the house and reported that the foundations were sound. But the emergency protective measures never materialised. Instead, the council proposed a more far-reaching and permanent solution which they estimated would cost €500,000, money the council said it didn’t have.

The OPW was approached but because the Roches house had not been flooded, there was no funding for the work that needed to be done. Furthermore, the OPW had no responsibility for river erosion. Nor did the council or anybody else.

In the new year, the council offered to rehouse the Roches.  “They would buy a bungalow, we would rent it and be means tested,” explained Eamon. It was not  an offer they could accept as it would mean abandoning the home that was intended as their dream retirement home.

Fortunately, local builder, Neilie Lyons turned up at their door one evening, saying he had a plan. As things turned out, that plan had to be ruled out by the Roches’ engineer Donal Brosnan. But then Mr Lyons brought in Noel Hilliard of Hilliard Ltd, Listowel, a company that carries out large-scale drilling and piling contracts both here at home and abroad. And plan B was born.

Noel Hilliard’s plan was a relatively simple but clever and effective one, which was carefully designed by the Dublin company he recommended, AGL.

“They did the designs over a weekend,” Eamon explained.

But obstacles began springing up almost straight away.

According to Eamon, the OPW wouldn’t give them the information they needed about the depth of the rock and they had to bore a hole to find that out, adding €2,000 to the bill.

The proposal to move river gravel to below the Roches’ house in order to create a temporary bed and allow the Hilliard machinery to carry out the work from the river, was also ruled out.

“We were told it would distress the fish,” Marie explained.

Then there were delays as different versions  of the designs for the work were requested by the council before the relevant authorisation could issue. And there were other demands from the council.

“They wanted us to hire our engineer on a full-time basis while the work was going on,” Eamon said.

Again, that would cost money they could ill-afford.

In the end, Noel Hilliard proposed the work would be carried out by crane, which proved possible thanks to the co-operation of the Roches’ neighbour.

But as Eamon explained:  “Without Neilie, none of this would have happened and Noel fitted us in between jobs.”

But Eamon and Marie remain perplexed. How is it they ask that money was found in the council’s road fund in 2010/2011 to help protect a house threatened by river erosion on the Allaughan, a tributary of the Feale, yet they had to foot the bill themselves?

They also wonder where the council’s responsibility begins and ends, given that the  land on which their house stands was originally owned by the council who sold it to the developer, and then gave planning permission for it, without any conditions regarding river-bank erosion.

And they wonder too at a council which was prepared to spend €50-60,000 on emergency measures last November yet has not offered them a cent towards their bill.

That bill, while substantial for them, was also, they point out, only a fraction of the €500,000 the council said was needed to carry out a permanent solution. And but for the good-will of the people involved the Roches’ final bill would have been considerably higher.

What puzzles Eamon above all is that he has learnt the OPW is responsible for the River Feale from Listowel onwards and is now preparing to take preventative erosion action there. Meanwhile, the bank of the Feale behind New Street remains at risk from erosion.