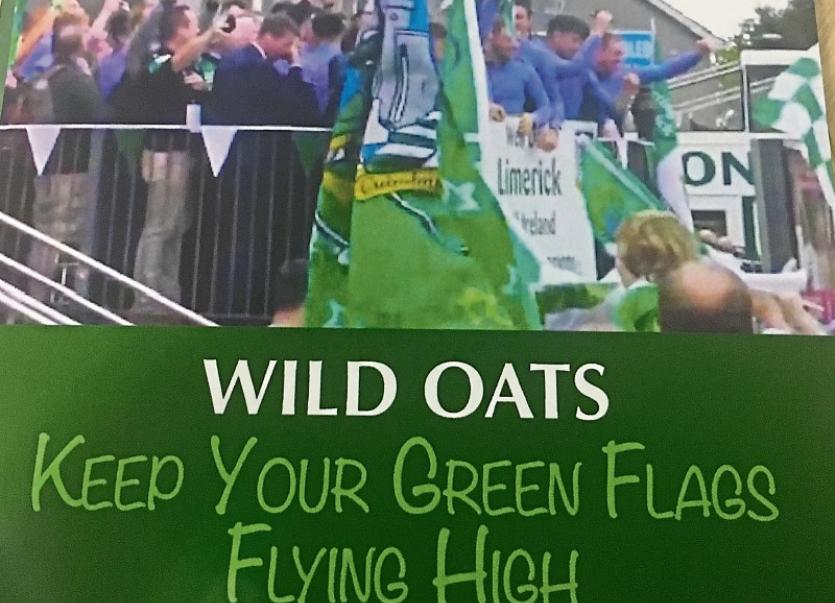 THE All-Ireland winning Limerick hurlers sowed a seed in the mind of Mike Cleary, of the Wild Oats, to write a song.

The band produced Keep Your Green Flags Flying High and they will launch the CD this Saturday night.

It takes place in The Teach, Cloverfield at 8.30pm. It will be part of the traditional Irish fireside night featuring music, set dancing and sean nos. All proceeds will go to the Limerick branch of the Parkinsons Association.

Mike thanked Teresa O’Dea and all the organisers for the invite to launch their song.

Mike, who is from Dromin-Athlacc but lives in Bruff, said the Wild Oats is made of musicians all in their seventies.

“I was fooling around with the song Wrap the Green Flag Around me Boys. It is an old Fenian song sang by the rebels of old. I was working on it to record it with the lads

“Then coming up to the All-Ireland final I said if they win this I would turn it around and do a Limerick song. I didn’t go to the All-Ireland, I watched it in Moloney’s Pub in Knockainey. I went home that night and wrote Keep Your Green Flags Flying High,” said Mike.

The chorus goes, “So keep you green flags flying high, to wave in the wind, this is only the beginning boys, who knows where it will end”.

Over 800 CDs have been sold even before the official launch. Mike was also inspired by the late Dolores O’Riordan.

“After they beat Cork in the semi-final Linger was played in Croke Park and after the All-Ireland final they played Dreams. I was fascinated with the way the tragically early passing of Dolores and the sadness of that, and then the euphoria of the All-Ireland complemented each other in a tragic sense,” said Mike, who wrote the moving words, “So we lingered just to make the moment last with Dolores singing in our ears, ‘twas the coming true of all our dreams to celebrate for years”.

All are welcome to the launch on Saturday night in The Teach, Cloverfield at 8.30pm.