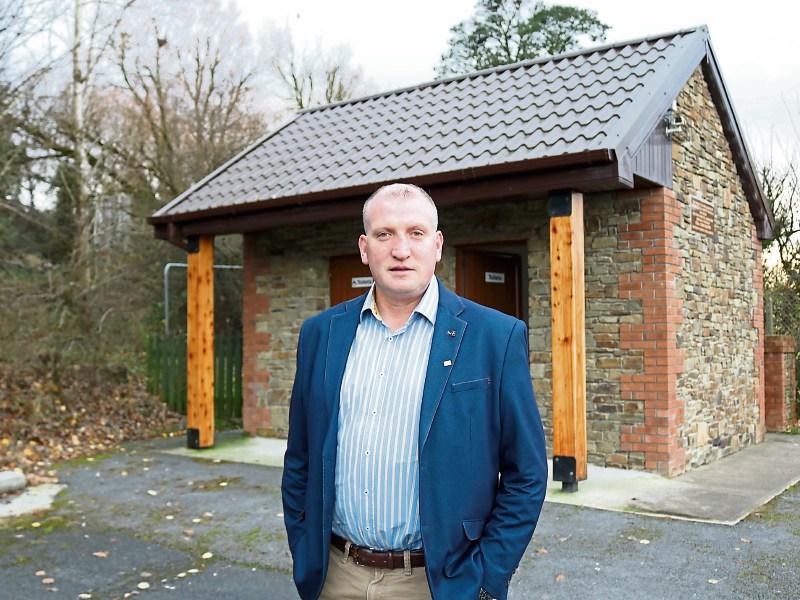 Cllr Galvin beside the public toilet in Abbeyfeale Town Park

A COUNTY Limerick councillor Liam Galvin voted down Budget 2019 over a lack of loos on his home town’s Main Street.

At a tempestuous budget meeting, Abbeyfeale Cllr Galvin joined with the rest of his Fine Gael colleagues in rejecting the council’s €689m book of estimates.​

But while the rest of his party’s councillors pulled the chain over a hike in the commercial rate –  the former mayor voted to reject the estimates due to the town’s lack of loos.

It has been 19 years since there has been a public toilet in Abbeyfeale’s Main Street, and Cllr Galvin is disgusted council bosses did not spend a penny – or indeed more – in putting one in the book of estimates.

His attempts to stop the budget passing failed, with Fianna Fail, Labour and Independents passing it by the odd vote in 37.

“We haven’t had a public toilet in Abbeyfeale since 1999, almost 20 years ago. This is the biggest budget we have ever had to give away. I flagged this month's ago at muncipal level, I have been flagging this for years. I’ve asked money to be set aside for a public toilet for the town,” Cllr Galvin said after the budget meeting.

However, no money for a toilet was forthcoming in the budget – only cash for a feasibility study which could potentially lead to such a facility in the future.

“We’re promoting tourism throughout the county, and we have a gateway to Kerry here which is the biggest tourist county in Ireland,” Cllr Galvin said, “For the business people in Abbeyfeale, there are people coming into their premises on a daily basis, asking them to use toilets. It’s very wrong.”

The Fine Gael man has urged council bosses to link in with the Abbeyfeale Community Council – which he described as “one of the best in the country” to provide a toilet.

“I’m sick and tired of flagging this, and I am not going to let it go until a public toilet is put in place in the town. I am now 15 years on the local authority, 15 years looking for it. And I'm not going wait another 15 years for this,” the firebrand member said.

He said he finds it surprising that with three high-profile councillors based in the town of Abbeyfeale, council executive did not adhere to his wish for a toilet.

One of these, Fianna Fail councillor Francis Foley, previously supported Cllr Galvin’s toilet call – but backed the budget as agreed.