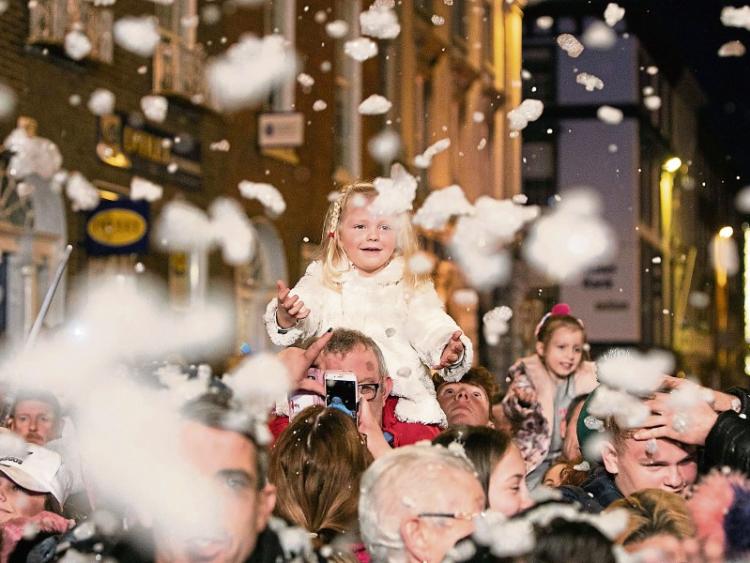 There were huge crowds on O'Connell Street for Light up Limerick on Sunday evening Picture: Sean Curtin/True Media

UPWARDS of 20,000 people turned out on Sunday evening to see the Christmas lights being switched on in Limerick city.

CervicalCheck campaigner Vicky Phelan and her family were guests of honour to flick the switch on the Christmas display, which was accompanied by fireworks and plenty of music and festive fun.

From early afternoon, families dressed in Christmas hats and jumpers flocked to the city centre in the hope of gaining a good vantage point for the Light Up Limerick event which was the biggest to date.

Characters from the hit Disney movie, Frozen entertained the crowds who gave a huge welcome to Santa Claus following his arrival.

The stage for the event was located at O’Connell Street near its junction with Mallow Street with a number of big screens relaying the celebrations to the massive crowds.

Several videos of the event have demonstrated the incredible numbers that turned out, estimated by Limerick City and County Council to be around 20,000.

Before the switching on ceremony at 6pm, there were performances from the Corpus Christi school choir, the Limerick Gospel Choir as well cast members from both of Limerick’s Christmas pantos.

There was was huge cheer when Vicky Phelan took to the stage with members of her family and professed that she considers herself to be a Limerick woman as she has lived in the city for so long.

And they’re on! Thank you so much to the people of #Limerick for joining us tonight for #LightUpLimerick, the official start of #ChristmasinLimerick! @PhelanVicky pic.twitter.com/lVVFpFbFW1

Mayor of Limerick City and County, Cllr James Collins, said the Light Up Limerick event is now one of the highlights of the year.

“People want to come out, they want events to be put on and there has been great entertainment here today. You close down the main street, you use it in a different way and you have fun,” he said.

Some of the massive crowds in Limerick city centre ahead of the turning on of the Christmas lights #LightUpLimerick #ChristmasinLimerick pic.twitter.com/1G4YQKnKmO