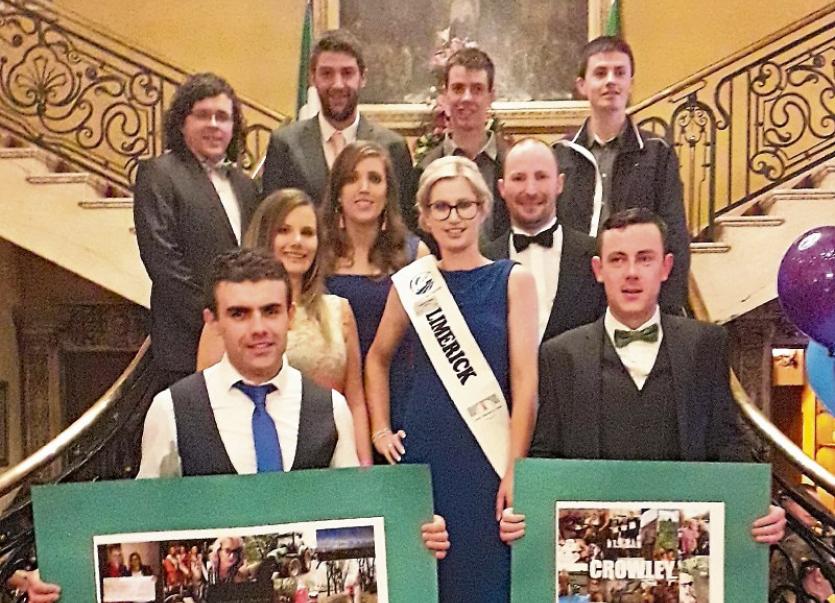 IT’S BEEN some year for Limerick ending famines.

In the 54 year history of Macra Queen of the Land a Limerick lady had only won it once – Chris Clifford in 1990 - until now. Louise Crowley, from Croom, who wasn’t even born then, has ended another long wait.

She was crowned Clarke Machinery Group Queen of the Land 2018 on Sunday night in Tullamore. The celebrations, as can be seen by the photo, were akin to Croke Park.

“It is a great achievement for Louise and her family to come out on top of a competition involving 30 women from across the country after being judged by such a well known national panel.

“It’s always important for young people to have role models in their local areas and I have no doubt that Louise will be one of those here in Limerick,” said Minister O’Donovan. And Louise is definitely a role model for women considering a career in agriculture. Since she was a little girl, there was only one job for Louise.

“I was always going farming. When we were coming up to Leaving Cert and picking courses I didn’t even want to know about CAO points because I was going to Pallaskenry Agricultural College and that was that. I did the Dairy Herd Management course in Pallaskenry and then a Bachelor of Science in Agriculture in Cork Institute of Technology. I graduated two weeks ago,” said Louise, who is a daughter of John Crowley and Teresa Fitzgerald. She has one sister, Charlotte.

“Myself and my dad went into partnership three years ago. I bought extra land myself in March, I bought 70 acres in Meanus.

“I’m going to use it as silage ground and take cattle over there to have a bigger milking block at home. We milk 150 cows,” said Louise.

She says a lot more women are getting involved in farming.

“There would always have been women helping out on the home farm but never seen as the boss. Whereas now there is a bit more of a shift happening. Farms are being left to the daughter instead of the son. It is only fair. There is no point giving a farm to someone if they are not capable of running it.

“It is becoming a lot easier to do the job with technology. If you can learn to use a tractor it cuts out the need for a lot of manual labour. That was always the limiting factor for women, that they coudn’t do the pulling and dragging. Times are changing,” said Louise. And for the better.