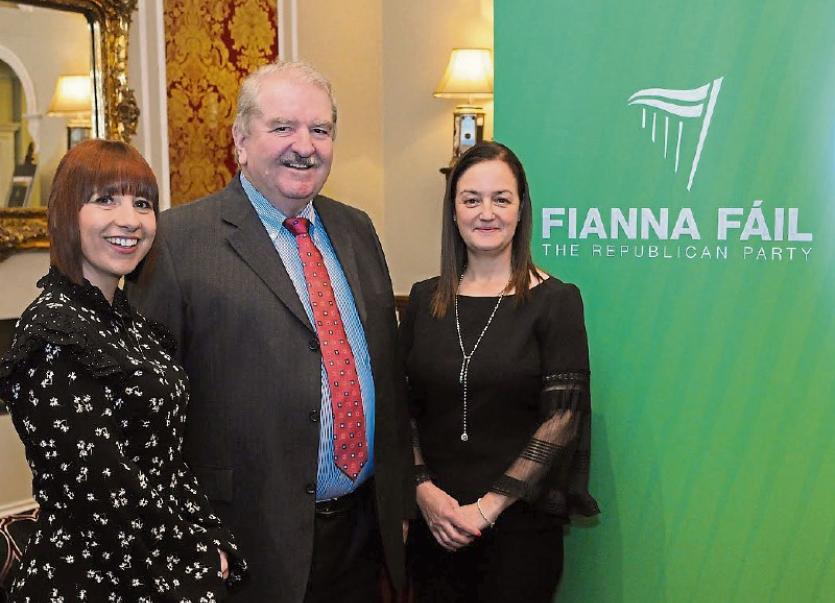 THE first of the Fianna Fail selection conventions in Limerick county for next year’s local elections has endorsed three candidates on the party ticket for the Adare Rathkeale Municipal District.

They are the party’s only sitting councillor in the six-seater district, Cllr Kevin Sheahan and first-timers Bridie Collins, Adare, and Trina O’Dea, Croom.

They can expect to be up against at least two Independents, Emmett O’Brien and Richard O’Donoghue, both formerly of the Fianna Fail family, as well as at least three Fine Gael candidates and a Sinn Fein candidate.

Ms Collins is involved in the hospitality business in Adare with her husband Sean while Ms O’Dea works with Deputy Niall Collins in his constituency office.

Ms O’Dea said it was an “honour to be selected”.

“I am looking forward to this campaign – I very much enjoy being involved in the community and helping people – in all of my career choices to date helping people has always been to the forefront of each position I’ve held,” she said.

Cllr Sheahan, a councillor since 1985, had said ahead of selection: “It is another election. I will be making every effort to be re-elected. I am looking forward to it.”

Next Thursday, in the Dunraven Arms Hotel in Adare, it will be the turn of Fine Gael to select their candidates for the same district.

Three candidates have already been nominated: sitting councillors Stephen Keary and Adam Teskey and former councillor Leo Walsh who has again thrown his hat into the ring. However, it remains to be seen whether party headquarters will want three or four candidates to stand.

In 2014, the first election following the amalgamation of the city and county and the creation of six new municipal districts, Fine Gael ran three candidates in Adare Rathkeale and secured 4,327 first preference votes or 35% of the total, claiming two of the six seats in the district.

This time out, the party will hope to do better.

But he feels he is in a good position to attract the Fine Gael votes from his base in the Raheen Ballyneety area. There is a large area from Raheen across to Ballybricken and out to Croom and Crecora which is unrepresented, he pointed out to the Limerick Leader.

“The party approached me to know if I would stand,” he explained.

He went to the City East selection convention, the district he stood in and lost in 2014, but withdrew his name on the night as he had made up his mind to seek a nomination for Adare Rathkeale.

“I am a country man. I am more familiar with the county,” he said.

The boundary changes have made certain difficulties for him. Initially, he was co-opted as a councillor for the Castleconnell area but this then became Adare. In 2014, he opted to stand in City East but is now back in Adare Rathkeale.

“I missed it while I was out,” he said. “I always had it in mind to stand again. The bug is there.”

Cllr Adam Teskey, from Rathkeale, was co-opted to the council following the general election of 2016 when Tom Neville took a Dáil seat.

The Fine Gael selection convention for Newcastle West is on November 29.