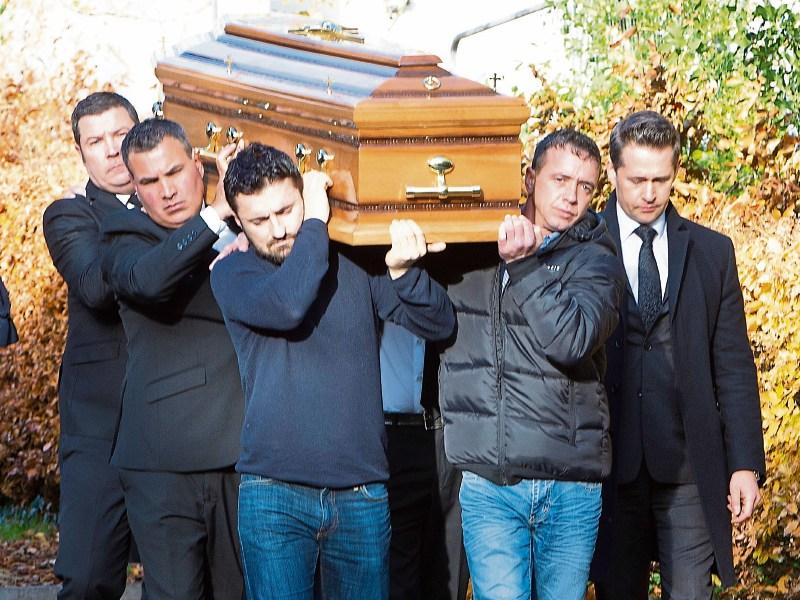 THERE was an end to 18 years of ‘desperately trying to get information’ and a sign that sometimes the ‘impossible is truly possible’, as friends and family said their final farewells to Aengus ‘Gussie’ Shanahan in Limerick this Saturday.

Mr Shanahan, who first went missing in February 2000, was laid to rest this Saturday with his late mother Nancy, following a funeral Mass at our Our Lady of the Rosary Church, Ennis Road.

Among the church’s congregation were other families who are still searching for loved ones, according to Fr Aquinas Duffy, Gussie's cousin, who led the funeral Mass.

“It's been a long 18 years, as searching for answers, making appeals, desperately trying to get information that would bring the searching to an end,” Fr Duffy said.

“So many families are still in that case, and in some of the cases there are people who have the answers that can bring an end to their searching also.”

“It’s lovely here this morning to meet some of the other families who are also waiting in hope for an end to their searching.”

“When I woke up this morning, I had to check that I was not still dreaming. I still feel a bit like that, it’s almost unreal that I would be the celebrant of Aengus’ funeral Mass today.”

“I’d often pray for this moment over the last 18 years and there were many false dawns that raised hopes, that were crashed again.”

“But the fact that we are here shows that the impossible is truly possible and that we should never ever give up hope.”

“Years go by sometimes and hopes fail. It can be very difficult to hang on to something,” Fr Duffy added.

“In 2016, at the funeral of his mother Nancy, here in this very church, I had a sense then that the two of them were united again in the spirit world.”

“That Nancy, not to help Aengus for herself but for us, would storm heaven, would leave no stone unturned until those left behind would find peace and be allowed to morn. Her prayers have been answered.”

Mr Shanahan, aged 20, was reported missing in February 2000, and his partial remains were discovered on a small island in Bunratty in October 2001.

However, it was not until this year that gardai were able to match his DNA to the remains.

“We owe this morning a debt of gratitude to so many people,” Fr Duffy said.

“To the gardaí, the forensic science labs, to missing persons organisations, to search, rescue and recovery groups, to the media and to all who played a part in bringing us to this afternoon here in Limerick.”

A poem, written by the late Nancy Shanahan about the disappearance of her son was read by Mr Shanahan’s sister Reiltin.

“I loved him with all of my heart. There is a gap in my life now of him, I will meet him in heaven. He never goes away, he’s always there.”

A poignant tribute including photographs and videos showing some of his family’s most “treasured memories” of Mr Shanahan, was also played to Ed Sheeran’s ‘Photograph.’

“Today we gather to erase the negativity, sorrow, and sadness that surrounded him for the last 18 years,” his brother Roibeard told the congregation.

“Rather we are here to fill it with love, positivity, and celebration for the life of Aengus Gussie Shanahan.”

“Gussie was the baby of our family, who was adored by all of us. He was good natured, friendly, loyal and hardworking.”

“We would like to thank everyone who has reached out to help in our quest to find Aengus over the last 18 years. It will never be forgotten.”

“We are in no doubt as to who allowed us to be here today; The one and only Nancy Shanahan.”

“We know in our hearts that she stormed heaven and got her final wish to have her darling Gussie returned to her.”

“One thing that we want to come from today is for people to remember is that Aengus was not just the boy in the missing poster.”

“He had 20 years of much more which we were delighted as a family to share with him.”

“We’ll miss you brother, now rest easy and enjoy the waltz with Mam.”

Gussie is the beloved son of Bob and the late Nancy (Tuohy) Shanahan, adored brother of Roibeard and sisters Grainne and Reiltin, brothers-in-law Gordon and David, sister-in-law Edwina, nephews Conor, Jack and Dylan and nieces Emily and Annie, extended family and friends.