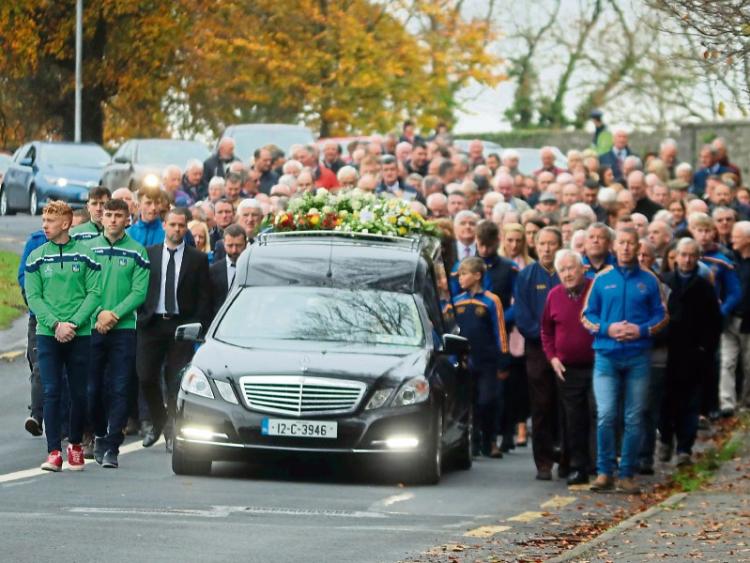 The village of Patrickswell came to a standstill as the local community paid a final tribute to All-Star hurler Leonard Enright Picture: Michael Cowhey

LIMERICK You’re a Lady was sung loudly as the coffin carrying the remains of hurling legend Leonard Enright was carried from the Church of the Blessed Virgin, Patrickswell following his funeral Mass on Monday.

Hundreds of mourners from the worlds of GAA and politics attended the funeral to pay their final respects to the 65-year-old, who was inducted into the GAA Hall of Fame earlier this year.

Leonard, who previously served on the old Limerick County Council died at Milford Hospice on Friday following a lengthy illness.

The village of Patrickswell came to a standstill as the local community paid a final tribute to the All-Star hurler who won eight county titles with his club as well as National League and Munster titles with Limerick.

Members of Patrickswell GAA club – past and present – attended the funeral and formed a guard of honour as the coffin carrying Leonard’s remains was carried from the  Church of the Blessed Virgin.

Prominent GAA figures from across the country including Cyril Farrell (Galway), Brian Cody (Kilkenny) and legendary RTÉ broadcaster Mícheál Ó Muircheartaigh were also in attendance along with several politicians some of whom served with Leonard Enright during his time on Limerick County Council.

The Mayor of Limerick City and County Council, Cllr James Collins, represented the local authority at the funeral Mass having chaired a special meeting earlier in the day at which a formal vote of sympathy was passed.

A moment’s silence was held in the Gaelic Grounds prior to Na Piarsaigh’s Munster club semi-final against Clonoulty-Rossmore on Sunday. The county champions also wore black armbands.

The president of the GAA, John Horan was among those who paid tribute to Leonard Enright. “Over a long and distinguished career, Leonard Enright was an outstanding hurler for Limerick and for Patrickswell, a fantastic performer who led by example,” he said,

Gifts presented during Monday’s  funeral Mass included a hurley and sliothar; a crossword puzzle, a family photograph and a freshly pulled pint of Guinness, which generated applause from the congregation as it was brought to the altar by Leonard’s good friend Phil Sullivan.

In his homily, Fr Michael Cussen said Leonard Enright was a “never a man for too many words” and was unassuming in his ways.  “There is huge sadness at his loss,” he told mourners adding there is also a sense of relief that his suffering has come to an end.

While not perfect, he said Leonard was a special person who touched the hearts of many people.

“Saint Leonard would not ring a bell in our hearts but Leonard who was, and who forever will be, special touched all our hearts.”

Addressing mourners, Leonard’s brother-in-law PJ O’Grady, said he was a “sportsman and a gentleman supreme” who can now rightly be called a legend.

“Outside of sport, he was a great father, a great husband, a great grandfather and he loved all his kids,” he added.

PJ said Leonard had passed away shortly after Friday’s All-Stars were announced on TV and tributes paid to him in a video montage marking his induction to the Hall of Fame.

“We were all watching them – very few people knew that Leonard was fighting for his life at that stage. There was a television inside in the room with all the family watching the programme and no sooner was it over Leonard passed away nice and peacefully,” he said. Following the funeral Mass, Leonard Enright was laid to rest at St Mary's new cemetery in Patrickswell. His coffin was shouldered from the main road by friends, family, fellow clubmen and three of Limerick’s All Ireland heroes.

He is survived by his wife Birdie and children Alan, Thomas, David and Mary.