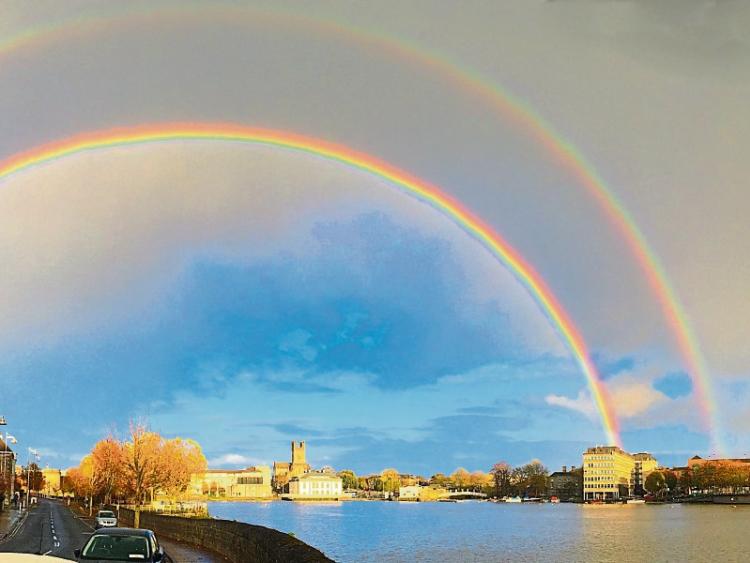 TWO POTS of gold could be located at Sarsfield House and Arthurs Quay after a stunning photo of a ‘double rainbow’ taken by Sean Ryan caused a stir online.

The photograph taken at Clancy Strand displays the colourful marvel spanning across the two shores of the River Shannon, set against gorgeous blue skies.

Weather expert Mark Dunphy of Irish Weather Online, said that Mr Ryan, who sent the picture to the Limerick Leader, was very fortunate to capture the two rainbows in his picture.

“You’ll need just the right angle to see two rainbows, it’s not a particularly rare phenomenon, but good luck was needed to photograph such a vivid double rainbow as seen in this photo,” Mr Dunphy explained.

Mr Dunphy also revealed that triple rainbows are possible and that the upper rainbow’s colours will always be reversed because the light is reflecting off the raindrops.

Thanks to Sean Ryan for this fabulous rainbow pic over the Limerick city skies . . . . #readerspictures #limerickleader #limerick #lifeinlimerick #TheLeader

Limerick has been blessed with some good fortune this year, particularly a long-awaited All-Ireland win in August, and perhaps the vibrant rainbow phenomenon could be an indicator of good times ahead for the city this Christmas season.