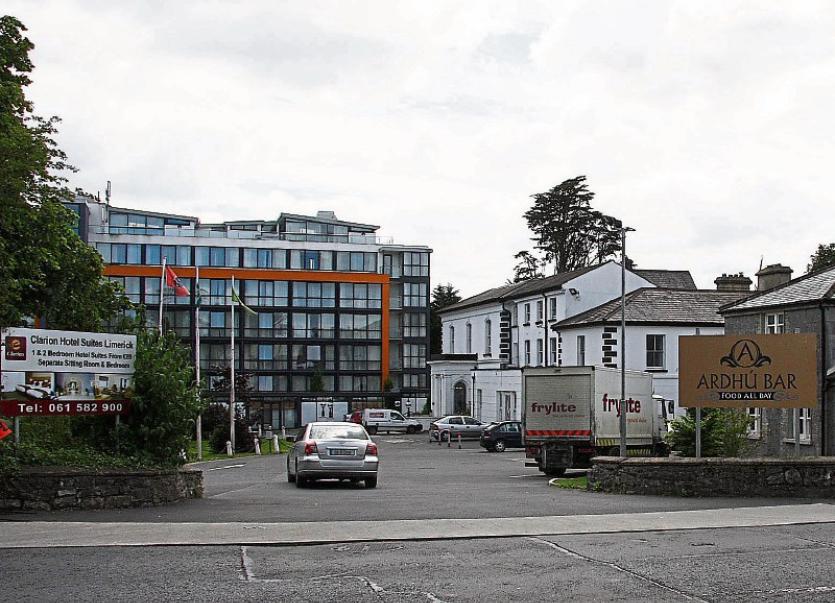 The old Clarion Suites site on the Ennis Road, which is on the market and has attracted huge interest with up to 10 bidders

UP to ten parties have expressed an interest in buying and developing the former Clarion Suites site on the Ennis Road in Limerick.

As exclusively revealed by the Limerick Leader, Nama has put the former hotel site on the market for over €5m – and it has attracted huge interest.

The site has been in the agency’s ownership since 2010 when the previous landowners Budelli Construction collapsed into receivership.

And while planning permission is in place for 61 apartments, it’s understood other proposals are coming forward for alternative uses including a health park and the restoration of the hotel.

With a sale expected to be completed in a number of weeks, local councillor Michael Hourigan has warmly welcomed the interest.

“It’s been sitting there for an awful long time. During the recession, everything went wrong out there. Having said that as a public representative, I would be anxious to see it come back into use. There is nothing worse than a derelict site or a derelict building in an area. Hopefully it will fit into the area and blend in,” he said.

Cllr Hourigan said while he would welcome apartments, his first preference would be for it to return to use as a hotel complex.

Meanwhile, An Bord Pleanala has ruled that if the development proceeds as housing, one unit will have to be designated as social housing.

Under ‘part five’ regulations, a small proportion of units of any private development have to be leased by the local authority.

The receiver appointed to Budelli Construction, Eoin Ryan, had asked Limerick City and County Council for clarification on this, asking whether there is a need due to the fact there are two separate buildings planned for renovation – one in the old hotel complex, the other the former Ardhú House.

Mr Ryan had argued that taken separately, with just a handful of units set to be created in the old Ardhú House, this would fall below the threshold for social housing provision.

Limerick’s local authority had referred the matter to An Bord Pleanala.

More than 50 local residents objected to the plans to build a residential development in the area.