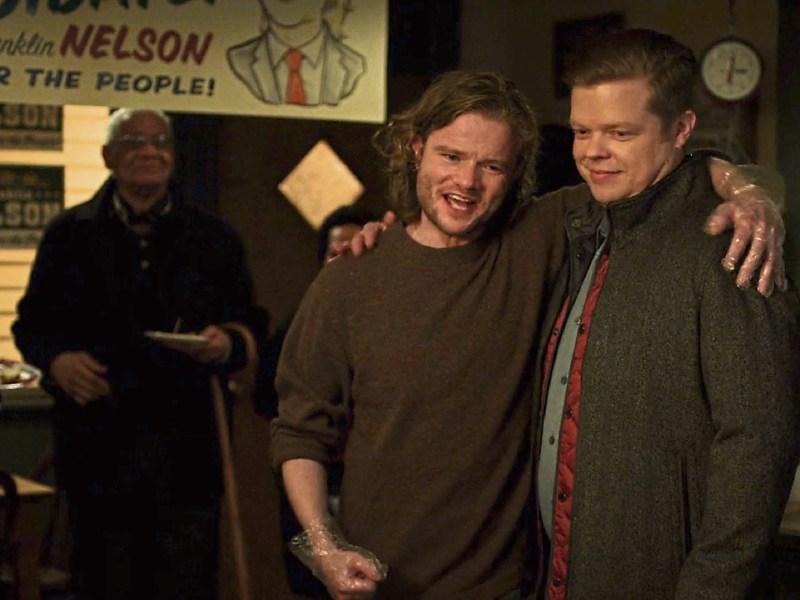 Theo and Foggy: Peter Halpin in Marvel’s Daredevil which is currently on Netflix, as Theo Nelson with his ‘brother’ Foggy, played by actor Elden Henson

LIMERICK actor Peter Halpin says he has been on a “rollercoaster ride” since landing a role on Marvel’s Daredevil.

The Mungret man’s big news was revealed last week ahead of the premiere of the third series of the acclaimed Netflix show, in which he stars.

It was a long wait from June, when he wrapped filming on the series, in which he plays the part of Theo Nelson, the affable, younger brother of attorney Foggy Nelson, sidekick to main character Matthew Murdock, who is played by Charlie Cox.

Speaking to the Limerick Leader from New York, where he is primarily based, Peter, said he was “absolutely thrilled, over the moon” to land the role on Daredevil, which is one of Netflix’s flagship shows.

“It’s a real dream come true. Mountains of hard work is finally paying off, thank God,” laughed Peter, who went to school in Crescent College Comprehensive and got his big break in the Limerick-set and shot Angela’s Ashes in 1999.

“My agents sent me in for the role, the casting director was awesome, she made me feel very relaxed and got the best out of me as a result. The rest as they say, is history. I’m feeling very grateful and blessed.

“It’s a recurring role, so you’ll see my character right through season 3 and with the help of God season 4 also, if there will be one,” he added.

Peter laughed that his “phone below up, along with my social media” after the news broke last week. He said he was “blessed to be working with these legends”, in reference to a cast that also includes Vincent D’Onofrio and Rosario Dawson.

But day one on set was nervy for the Limerick man, despite his extensive film, TV and stage experience, which also includes roles in Neil Jordan’s Breakfast on Pluto and Lenny Abrahamson’s Garage and is well known as the face of AIB’s First Time Buyer commercial, an ad that aired continually for four years.

“The first day was a little daunting, in that I didn’t know what part of the set I was supposed to go to, I ended up in a holding area with 100 extras before one of the assistant directors found me,” he laughed.

“It was my first time meeting everybody also, but they couldn’t have been nicer and welcoming. We shot from November 2017 right through to June.

“It was a roller coaster ride, but one I wouldn’t mind being on for the rest of my life!”

Industry website Deadline reported that Halpin’s character of Theo Nelson “is as genial as his older sibling but less career-driven than Matthew Murdock’s law partner Foggy, played by Elden Henson. The younger Nelson has worked his whole life with at his parents’ local business, the Hell’s Kitchen Butcher Shop in the gritty namesake New York neighbourhood.

“The Theo Nelson character is a new addition to the Daredevil mythology — he has not previously appeared in the pages of Marvel Comics, which has published the hero’s ongoing adventures since 1964, nor in the 2003 feature film Daredevil,” it added.

The early reaction to the series and to Halpin’s part in it has been good and he was welcomed to the show by Vincent D’Onofrio on Twitter.

Since relocating to New York, Halpin has also produced and starred in Narcan, a gritty short film set in New York in which he played a paramedic. It was later shown on RTE and won him the award for Best Actor in a leading role at The Williamsburg Film Festival in Brooklyn.

He starred on stage with Gabriel Byrne and Fionnula Flanagan in an all-star production of Bloomsday on Broadway and has recently finished work on two films - The Resurrection Love Song and Prerequisite.

“I am primarily based in New York City and a little on the west coast in Los Angeles these days,” he explained.

“I would love to get to the stage where I would have enough work on both coasts to enable me to split my time and become bi-coastal. All in good time, I guess.”

But he still has time for home, where his parents Denis and Mary still live in Mungret, and he keeps in close contact with friends and family regardless of the latest screen or stage adventure.

“I try to get home twice a year, but it doesn’t always work out. It’s so important to keep in touch with family and close friends though,” he says.

“New York is such a vibrant place, you get sucked into the hustle and bustle of it, but I’ve learned the hard way that’s it paramount to keep in contact with the people who helped you and loved you to get here,” adds Peter.